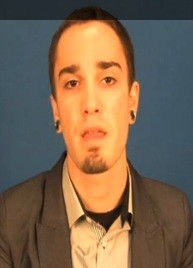 Visalia, Calif. - Gay teenager Eric James Borges, who volunteered for the Trevor Project and made an "It Gets Better" video, killed himself last week.

In his "It Gets Better" video, Borges talks about coming out as a gay man.

"I was raised in an extremist Christian household," he said. "My earliest memories of relentless bullying were in kindergarten. I was physically, mentally, emotionally and verbally assaulted on a day-to-day basis."

Borges said he dropped out of high school and got his GED, but his freshman year at college was "a nightmare."

"My mother knew I was gay and attempted to perform an exorcism on me to cure me," he said.

He says in the video that he has made lots of friends and become a published writer and speaker since he came out (and was kicked out of his house). But still, he couldn't withstand the pressure, and he killed himself.

The Trevor Project's goal is to prevent suicide among LGBTQ youth.

"He was a volunteer teaching suicide prevention, so he knew what counseling was available to him," Laura McGuinnis, a spokeswoman for the Trevor Project, told the Washington Post. "Unfortunately suicide is so complicated, so rooted in mental illness, that it is difficult to know why he made that decision. It is very, very sad."