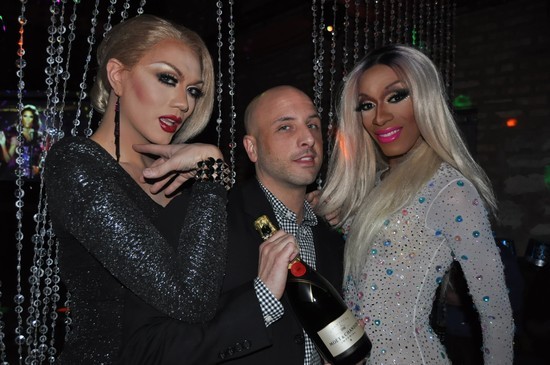 From New Zealand to New York to Chicago, everyone hoped for a brighter future

Chicago, IL - For many Chicagoans, gay and straight alike, New Years Eve is the biggest night of the year and Saturday night certainly didn't disappoint as hundreds crowded Boystown bars and clubs.

Chicago's LGBT community took to revelry as they celebrated the end of 2011 and ushered in the new year at midnight with a variety of events that were as diverse as the neighborhood.

Management at a number of Boystown clubs told ChicagoPride.com that the crowd numbers were up on previous years.

"The crowds were absolutely amazing," said Hydrate general manager Sean Kowta. "New Year's Eve is one of my favorite nights of the year and last night was one of the more memorable ones."

Kowta along with Ben Kramer, AK Miller and Jack Parton presented "Dance Until the World Ends" at Hydrate.

As Boystown prepared for celebration Saturday afternoon, Spin Nightclub general manager Robert Hoffman told ChicagoPride.com that they were expecting a record crowd as pre-sale tickets were already double what they were last year.

RuPaul's Drag Race stars Manila Luzon and Sahara Davenport rang in the new year at Spin where Luzon presented the enthusiastic crowd with the debut of her new single, "Hot Coture."

"2012 is going to be amazing," said Hoffman. "We are committed to throwing amazing parties and continuing to bring amazing talent to Chicago."

Throughout Boystown and around the world, cheering revelers welcomed 2012 and bid adieu to a year marred by economic turmoil and natural disasters.

"I honestly think everyone forgot about how bad things were this past year and let loose and had a great time," commented Kowta.

Year in Review: ChicagoPride.com revisits 11 of the biggest news stories from the past 12 months in LGBT Chicago