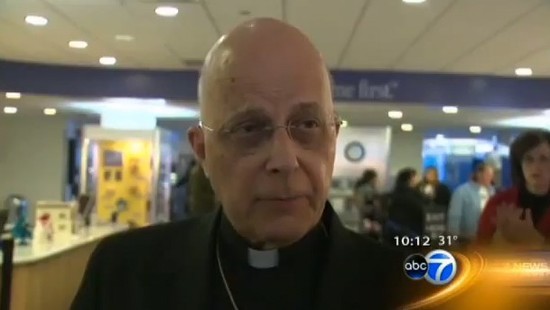 Chicago, IL - Two of Chicago's largest LGBT advocacy organizations are reacting to Cardinal Francis George's latest statement that blames organizers of the gay pride parade for the fact that he compared them to the Ku Klux Klan.

"When the pastor's request for reconsideration of the plans was ignored, the organizers invited an obvious comparison to other groups who have historically attempted to stifle the religious freedom of the Catholic Church," George said in a statement posted Tuesday on the Archdiocese website.

"The Cardinal is obviously avoiding The Calls for his resignation and apology," stated Anthony Martinez, executive director of The Civil Rights Agenda (TCRA). "His statement not only lays the blame for his comments squarely on the parade organizers by saying they ‘invited' his comments, but he does not take responsibility for his brazen and hurtful words."

Cardinal George, the head of the Catholic Conference of Illinois and the Archbishop of Chicago, further stoked the controversy by again asserting his KKK analogy.

"One such organization is the Ku Klux Klan which, well into the 1940's, paraded through American cities not only to interfere with Catholic worship but also to demonstrate that Catholics stand outside of the American consensus," continued George. "It is not a precedent anyone should want to emulate."

In response to Tuesday's statement TCRA has not only renewed its call for Cardinal George to issue an apology, but the gay rights group is now calling for him to resign.

"This most recent round of incendiary rhetoric from Cardinal Francis George is essentially a case of blaming the victim for being victimized," said Randy Hannig, Director of Public Policy for EQIL. "The LGBT community has no desire to ‘stifle the religious freedom of the Catholic Church,' as the Cardinal states."

Questioned last week about the parade schedule, George told Fox Chicago, "You don't want the gay liberation movement to morph into something like the Ku Klux Klan."

Coincidentally, the parade start time was shifted back to Noon last week to accomodate the church.

"The fact remains that the gay pride parade route has run less than half a block from Our Lady of Mount Carmel Church for decades, and the Archdiocese has never expressed a problem with that fact until now," said Hannig. "The Cardinal is making this a political issue as a last-ditch effort to quash the progress that the LGBT movement has made in recent years. A vast majority of rank-and-file Catholics who sit in the pews every Sunday agree with the philosophy behind the LGBT movement; it is the Cardinal that wants to continue living in the past by not accepting the fact that the LGBT movement is about one simple ideal – equality."

TCRA is not the first gay rights group to call for the Cardinal's resignation. Rainbow Sash Movement, a Catholic LGBT group, Wednesday joined in the call for George to resign.

In an online editorial posted last Friday, Windy City Times publisher and executive editor Tracy Baim called for the Cardinal to "graciously apologize, and step down from his post." She called the Cardinal's comments "vile."

Meanwhile an online petition calling for George to resign, which was launched last Friday by national LGBT advocacy group Truth Wins Out, has garnered over 4,000 signatures.

"The Chicago Gay Pride Parade has been organized and attended for many years without interfering with the worship of God in a Catholic church," George wrote. "When the 2012 Parade organizers announced a time and route change this year, it was apparent that the Parade would interfere with divine worship in a Catholic parish on the new route. When the pastor's request for reconsideration of the plans was ignored, the organizers invited an obvious comparison to other groups who have historically attempted to stifle the religious freedom of the Catholic Church. One such organization is the Ku Klux Klan which, well into the 1940's, paraded through American cities not only to interfere with Catholic worship but also to demonstrate that Catholics stand outside of the American consensus. It is not a precedent anyone should want to emulate.

"It is terribly wrong and sinful that gays and lesbians have been harassed and subjected to psychological and even physical harm. These tragedies can be addressed, however, without disturbing the organized and orderly public worship of God in a country that claims to be free. I am grateful that all parties concerned resolved this problem by moving the Parade's start time so as not to conflict with the celebration of Mass that Sunday."