Renewed calls for apology and resignation of Cardinal Francis George 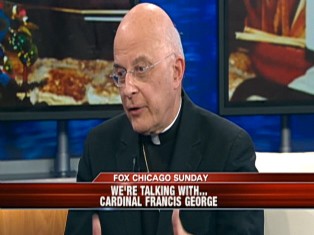 Voice Your Choice: Should Cardinal Francis George step down? (vote below)

Chicago, IL - As the widely reported and equally controversial interview with Cardinal Francis George aired Christmas morning on Chicago television station WFLD-TV, there is renewed criticism and calls for the Cardinal's resignation after he compared the gay rights movement to the Ku Klux Klan.

"You don't want the gay liberation movement to morph into something like the Ku Klux Klan, demonstrating against Catholicism," Cardinal George, the head of the Catholic Conference of Illinois and the Archbishop of Chicago, said Wednesday during a pre-recorded interview with Fox Chicago Sunday, which aired on Sunday, Dec. 25.

The Cardinal's statement was in reference to a local priest's concern about the new route and start time for the Chicago Gay Pride Parade, which the leadership of Our Lady of Mount Carmel Church, one of the oldest Catholic churches in Chicago, argued would conflict with Mass and inconvenience parishioners.

Coincidentally, the 10 a.m. start time was changed Thursday by parade organizers to accommodate the church. The 2012 parade will begin at Noon on Sunday, June 24, 2012.

On Friday Equality Illinois, the state's oldest and largest LGBT rights organization, urged the community to call the Cardinal's office (312-534-8230) and demand an apology. In an email to supporters, the group called the Cardinal's statements "completely contrary to the spirit of the holiday season and all norms of decency."

"To compare LGBT equality movement to the KKK is beyond irresponsible. The Cardinal not only mocks LGBT people who are struggling for equal protection under the law, but he also trivializes the real suffering experienced by KKK's victims - African Americans, Jews, and others - in the darkest days of our country's history," Equality Illinois CEO Bernard Cherkasov told ChicagoPride.com.

In an editorial posted online Friday, Windy City Times editor and publisher Tracy Baim called for the Cardinal to "graciously apologize, and step down from his post." She called the Cardinal's comments "vile."

"The Cardinal's remarks are offensive and bombastic," stated Anthony Martinez, executive director of The Civil Rights Agenda. "Throughout Illinois we have heard from and work with many LGBT individuals who are practicing Catholics that only seek compassion and acceptance from their faith community. Comments such as these only further perpetuate the hate-filled rhetoric that surrounds the public and religious debate with regards to LGBT personhood and relationships, as opposed to opening up an honest and meaningful dialogue."

Cardinal George and the Archdiocese of Chicago have recently clashed with the LGBT community over the passage and implementation of civil unions in the state.