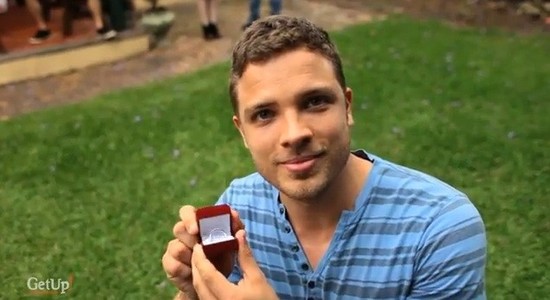 Australia - A lovely new ad chronicling the "meet cute" and eventual marriage of a gay couple in Australia is part of a new push to legalize marriage there.

The ad (which you must watch below; even the most cynical will be moved) is shot from the perspective of one of the men (whom we don't even see until the end). The man meets his partner on accident on a ferry, then goes through a typical relationship's ups and downs (fun days at the beach, a fight, moving in, meeting the parents, the death of the partner's mother) until the partner eventually gets on one knee and proposes.

The ad was created by GetUp! Australia. The message is one promoted by the American group "Third Way," which argues that more people will support gay marriage if it's put in the context of commitment (to your partner, to your partner's family, to helping your partner through hard times).

Polls show two-thirds of Australians support gay marriage, but the government has deemed it "not a high priority."