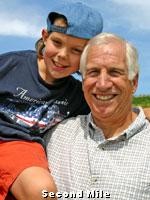 Centre County, PA - Gerald A. "Jerry" Sandusky, 67, former defensive coordinator for the Penn State Nittany Lions was arrested Saturday on 40 varying counts of sexual exploitation of a minor in Centre County, PA. The victims were all reported to be young boys. He was released on $100,000 unsecured bail.

Joe Paterno, Penn State head and the all-time Division I winningest football coach, has not been charged and is said to have immediately reported suspected problems to the appropriate authorities.

According to the Pennsylvania Magisterial District Judge docket, the offenses took place from 1996 to 2005. Charges ranged from involuntary deviate sexual intercourse of a person less than 16 years of age to corruption of minors and endangering the welfare of children.

Curley and Schultz are accused of covering up the crimes and lying to the grand jury. The Grand Jury reported unlike in most sexual assault cases, there were actually witnesses to some of the alleged attacks. In particular, both a janitor and a graduate assistant witnesses Sandusky attacking boys in the shower and locker areas at the school. Both witnesses reported the crimes to their superiors. And in both cases, nothing was done.

Sandusky is also accused of putting his hands on the boys' legs while taking them to sporting events; groping them while they slept over in his basement; and stalking them with repeated phone calls after they cut off contact.

Attorney General Linda Kelly (R-PA) said: "This is a case about a sexual predator who used his position within the university and community to repeatedly prey on young boys. It is also a case about high-ranking university officials who allegedly failed to report the sexual assault of a young boy after the information was brought to their attention, and later made false statements to a grand jury that was investigating a series of assaults on young boys."

Sandusky founded "The Second Mile" in 1977 in State College, Penn. It is a statewide, nonprofit organization for children who need additional support and who would benefit from positive human contact. He has no involvement with the organization since 2008, according to a representative.

He had long been described as a possible successor to Paterno.

Anti-gay activists have routinely suggested that gay people are child molesters, exacerbated by cover ups by the Catholic church, activists such as Anita Bryant and conduct by public officials such as Congressman Mark Foley (R-FL) who was forced to resign following revelations of inappropriate contact with congressional pages.

Sandusky is a married man. Some of the alleged rapes happened in the basement of the house he shared with his wife.