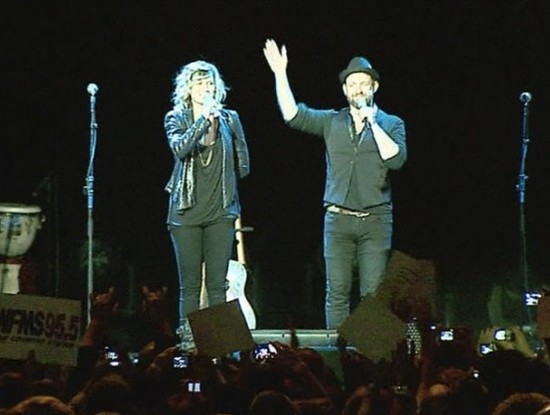 Jennifer Nettles: “We are all changed"

Indianapolis, IN - Jennifer Nettles and Kristian Bush, the country music duo known as Sugarland, returned to Indiana for the first time since the tragic stage collapse on Aug. 13 that killed seven people, including Chicagoan Christina Santiago.

"We are all changed by what happened then," Nettles told the crowd at Conseco Fieldhouse in Indianapolis on Friday night.

Santiago, programming manager for the Lesbian Community Care Project at Chicago's Howard Brown Health Center, was among those killed in August. Her partner, Alisha Brennon, was seriously injured.

"I can acknowledge that it may be an emotional show tonight, but it will also be celebratory. We are going to try to give you the best show we can, and to celebrate healing with you and celebrate life and music with you here tonight," Nettles said before starting Friday's emotionally-charged show.

The band said donations collected during the free show, which is nearly three months after the ill-fated concert, will be given to an assistance fund for the victims.