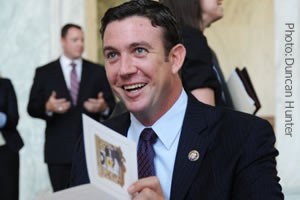 Hunter, a Republican and a former Marine who fought against repeal of "Don't Ask, Don't Tell," made his remarks during an interview with Family Research Council (FRC) President Tony Perkins on the radio show Washington Watch.

When Perkins asked whether Duncan was surprised by calls to end continued inequities in the military for LGBT service members, including having their marriages recognized, after the policy that had banned gay and bisexual members from serving openly had ended, Duncan answered that gay rights advocates were determined to take over the military.

"Are they moving faster than you thought they would?" Perkins asked.

"No, in fact this is exactly what we knew would happen," Duncan answered. "We're not especially clairvoyant, we can't see into the future, but the homosexual lobby isn't simply pressing to have equal status in the military with people that are heterosexual. They would like a military takeover by the lesbian, gay, bisexual, transgender community, and that's what they're going to keep pushing for until it happens."