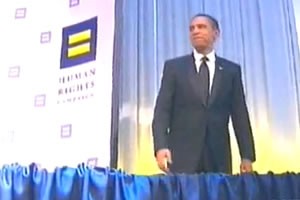 Obama is expected to address the annual fundraiser being held at the Washington Convention Center in Washington D.C. at 7PM. Obama keynoted the fundraiser in 2009.

The president is being urged to weigh in on several debates on the issue taking place throughout the country.

"One thing that would be incredibly helpful would be for the president and the administration to look out across the electoral landscape next year, understand where it is that we're engaged in marriage fights – whether overturning the ban in Oregon, or fighting a ban in Minnesota or North Carolina – and have something to say about that," Joe Solmonese, president of the Human Rights Campaign, the nation's largest gay rights group, told " target="new">ABC News.

"I think that will be important, particularly in North Carolina, where the legislature just passed a bill that would put a marriage ban on the ballot next year and where the president will find himself for the Democratic National Convention," he said.

Obama has said he opposes gay marriage bans – just this week, he reiterated his support for repeal of the Defense of Marriage Act (DOMA) – but he's not in the habit of becoming involved in state-level battles on the issue.

And while gay groups continue to call on the president to endorse gay marriage – Obama says he supports civil unions for gay couples and is "evolving" on marriage – Solmonese played down the possibility that he would do that on Saturday.

"He came into office opposed to [gay] marriage, and an administration that was defending DOMA. He now says he's evolving on marriage, and he and the administration have determined that DOMA is unconstitutional and not worthy of defense. And that is light-years from where any president prior to him has ever been," Solmonese said. "So where we find ourselves as a community is kind of reading between the lines and making his statements what we will and interpreting them as each of us might."