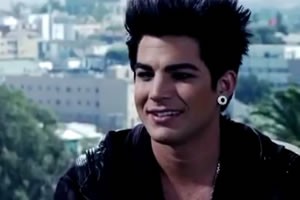 Los Angeles, CA - Rocker Adam Lambert and his mother Leila Lambert will be honored by Parents, Families and Friends of Lesbians and Gays (PFLAG) at their Sunday The LA Event in Beverly Hills, California.

"Look how sweet!" Adam messaged along with a photo to his more than 1 million Twitter followers. "My beautiful mother Leila marching in the Gay Pride Parade for PFLAG (that's Ellen's mom to the left!)."

"Over the past couple of years since American Idol I've recognized my responsibility as a gay man in the public eye and that's something that I'm really thankful for," Lambert said in accepting the award.