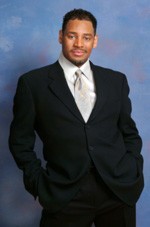 Out At The Ballgame, Sunday, August 15th

Chicago’s “Out at the Ballgame” was the first organized effort in the country to get lesbian and gay fans to attend a professional sports game in masse,” remarked organizer Bill Gubrud, Chicago Free Press staffer.

According to the Chicago Cubs, this year’s event is the largest group sales effort happening at Wrigley Field in 2004. “Out at the Ball Game” will host some 800 fans for the game, some 500 in the stands and several hundred more in two roof-top decks, Wrigley Rooftop at 3639 N. Sheffield and Tail-gaters at 3621-25 N. Sheffield. Over the last three years this event has brought some 6,000 plus gay and lesbian fans into Wrigley Field.

As a part of the event, a member of the LGBT community will throw the ceremonial first pitch, receive recognition on the auxiliary message boards during the game, and host one of its own to sing the National Anthem. This year, Chicago R&B singer, Reggie Davis (pictured above) has been chosen to perform the National Anthem.

On Sunday, the Cubs’ blue and red team colors will be outshone with the presence of many versions and styles of the rainbow flag, a recognized symbol of the gay community. “Out at the Ballgame” is an event created, developed, and produced by the Chicago Free Press.