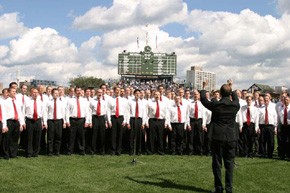 CGMC's return to Wrigley is the result of 44th Ward Alderman Tom Tunney's work, and highlights the Cubs' effort of good will in inviting a GLBT chorus to publicly perform the National Anthem at a game two years in a row.

CGMC Artistic Director, Patrick Sinozich, cited this significance. "What an honor for CGMC to represent the community again at Wrigley Field. Last Autumn's Cubs appearance kicked off our best season yet, and our return to the field really bookends what has been an amazing year for CGMC and our partner GLBT organizations."

Just back from The 7th International Festival of Gay and Lesbian Choruses in Montreal, The Chicago Gay Men's Chorus continues to produce a wide variety of music, theater, comedy and dance for the educational and cultural enrichment of the community. www.cgmc.org