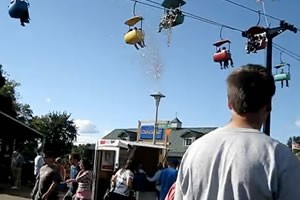 Minneapolis, MN - The state fair booth of Minnesota for Marriage, the coalition of mostly Christian conservative groups supporting a proposed gay marriage ban, was glitter bombed from the air over the Labor Day weekend.

The coalition, which had previously set up its informational booth outside the fairgrounds, in front of the Church of the Holy Childhood, on Thursday announced it had secured a booth inside the fairgrounds. Minnesotans United for All Families, the coalition opposed to the marriage amendment, wasn't so lucky. They talked to fair-goers from inside the booths of the Minnesota Democratic-Farmer-Labor (DFL), Greens and Independent parties.

In a video posted on YouTube, protesters riding in the fair's Sky Ride are seen showering the booth with glitter from the air.

"Where's our booth," yells one protester.

"Equality for all," another says.

The incident is the latest use of glittering for gay rights.

Late last month, about 100 protesters lined up outside one of the Christian counseling centers run by Minnesota Rep. Michele Bachmann's husband Marcus Bachmann to protest allegations that the clinic attempts to "cure"gay people of their sexuality. The demonstration included a man playing Mr. Bachmann being doused with glitter.