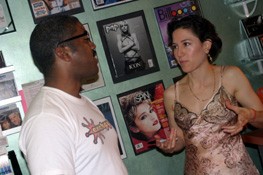 Chicago, IL - On a hot and humid summer Tuesday night, Donna De Lory – one of Madonna’s well-known long-time background singers in town for the Re-Invention Tour – made an in-store appearance at Borderline Music that was calming and serene for the many VIP customers who came to the Northside music store for the event. In contrast to the high-energy glitz and glamour of Madonna’s concert show, which leaves folks exhilarated yet drained, a solo De Lory shares with those around her a spiritual energy that rejuvenates and inspires.

For the performance part of the Borderline appearance, De Lory played on an instrument called a harmonium and sang three songs from her new CD, The Lover and the Beloved. Afterwards she met with her enthusiastic fans that came to hear her sing, shake her hand, collect an autograph, take a picture, or just be in her presence.

De Lory has been touring with Madonna for 18 years, but like the other veteran Madonna background singer Niki Haris – whom ChicagoPride.com interviewed last week (read the interview) – she has been busy over the years with her own music projects, journeying to different musical places outside the pop music world. As well, De Lory’s baby daughter, born last year, has provided a burst of creative energy and inspired De Lory to take her music to new levels.

Looking comfortable and relaxed during her appearance at Borderline, it was almost difficult to imagine that De Lory is in the midst of one of the biggest concert tours of the summer. She was obviously flattered by the response to her own music given by those in attendance and was most generous with her time, meeting fans and talking to the media. A vocal supporter of independent music retailers such as Borderline Music, she has a strong relationship with the store and its owner, Scott Jannush. She made a point to thank him, the rest of the Borderline family, and ChicagoPride.com (an event co-sponsor) for making her appearance such a success.

Note:
De Lory returns to the big concert stage with Madonna for two more shows at the United Center on Wednesday, July 14 and Thursday, July 15. Her new recently released CD, The Lover and the Beloved, as well as her other CDs can be purchased from ChicagoPride.com’s partner, Borderline Music at the store or on their web site: www.borderlinemusic.com.