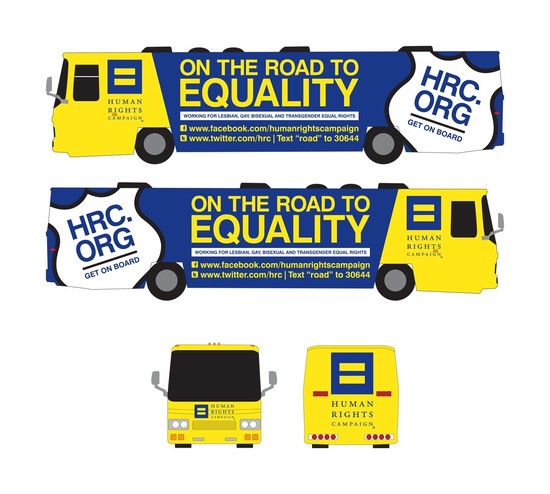 Washington, D.C. - The Human Rights Campaign is launching a nationwide bus tour to spread the message of equality. "On the Road to Equality" will run through 11 states that currently ban gay marriage.

"We are in the midst of a cultural tipping point on lesbian, gay, bisexual and transgender issues and our job is to push the scale as far and as fast as we can toward fairness," said HRC President Joe Solmonese. "The tour will serve as a powerful visibility tool and support the work of creating real and lasting change in these communities."

On Monday, HRC released a nationwide poll that found Americans widely support LGBT equality issues; however, the group noted work remains to be done particularly in the South and Midwest.

The 12 week bus tour, which will begin in Salt Lake City on Aug. 12 and end in Florida on Oct. 30., will travel to 17 cities in 11 states and D.C., with particular emphasis on the regions where support for equality lags.

HRC hopes to raise awareness about gay marriage, of course, but another goal is to help train local gays and lesbians how to empower themselves at the community level.

To that end, the HRC will offer training on changing local laws to include same-sex partner recognition and benefits. The idea is to start spreading gay marriage acceptance on a more grass-roots level -- among people who you see every day.