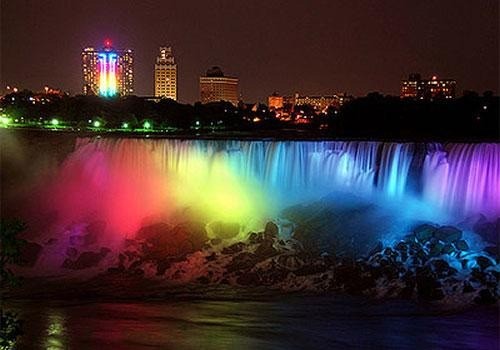 Kitty Lambert and Cheryle Rudd were among the first couples to be married as they were joined by more than 100 friends and family members in Niagara Falls, which was illuminated in rainbow-colored lighting, reported
The Buffalo News. Lambert, 54, and Rudd, 53, were married just after midnight during a religious ceremony overseen by clergy from three different faiths.

In New York City, the New York Times reported that 484 couples got married on Sunday in city clerk's offices throughout the five boroughs.

Gay marriage is also coming to the production of Tony Award-winning Avenue Q as puppet characters Rod and Ricky got hitched before the show's Sunday matinee.

New York made history on June 24 as the State Senate voted to legalize gay marriage, making the Empire State the sixth, and by far the most populous, where marriage equality is extended to all people regardless of sexual orientation.

A majority of New Yorkers support the new law, according to a
Quinnipiac University poll released just after Governor Andrew Cuomo signed the legislation into law.