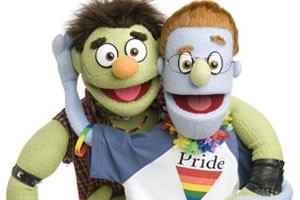 New York City - Gay marriage is coming to the productions of Avenue Q and Hair.

Avenue Q's puppet characters Rod and Ricky have announced they're getting hitched before the show's Sunday, July 24 matinee. The couple will marry on the law's first day in a ceremony at City Hall.

"To have this finally happen for us – especially so soon after Will and Kate – is unbelievable to me," Rod said in a statement. "I realize there are a lot of broken hearts out there now that Ricky and I are off the market – step back, all you chorus boys! – but I've known since Day One that Ricky is the husband for me. He's the furry fellow I want to spend my life with both on and off the stage."

The show, which plays at off-Broadway's New World Stages, is currently in its second year.

Couples from The Broadway community will tie the knot on the stage of the St. James Theatre on July 25 after that evening's performance of Hair, Broadway.com reported.

"It's not just a summer of love," Rory O'Malley, star of The Book of Mormon and a co-founder of the gay rights group Broadway Impact, said at a press conference announcing the event. "It's a summer of equality."

No word yet on brides or grooms.