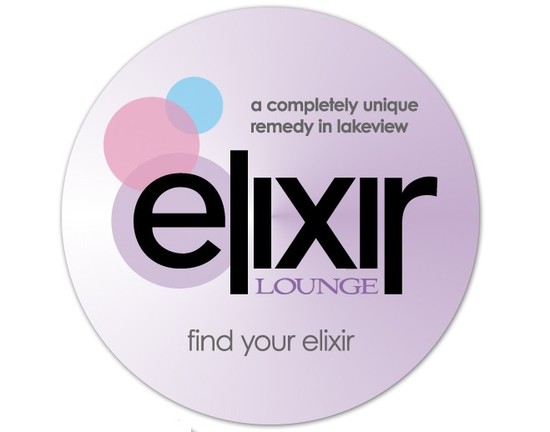 Chicago, IL - Elixir Lounge, the latest project from Halsted's Bar and Grill and Hydrate owner Mark Liberson, is now open for business in the former RJ's Video location at 3452 N Halsted in Boystown.

Unlike its sister bars, Elixir Lounge is not be a dance club or a pub, but instead features a smaller, more intimate lounge atmosphere having a capacity of around 45 people. Elixir also has a "secret" door connecting to Hydrate next door, which allows you to forgo the typical requirement of standing in line outside Hydrate.

Elixir features a craft cocktail menu that was designed in consultation with Adam Seger and Johnny Costello, both well-known mixologists in Chicago. Seger is an advanced sommelier, the founder of hum Spirits Company in Chicago, and a cocktail advisor for Lettuce Entertain You. Costello is well-known for designing the unique cocktails at Tiny Lounge, where he worked as a mixologist and bartender for around 10 years. Costello now applies his cocktail wisdom at GT Fish & Oyster, among other places, including of course Elixir Lounge.

The craft cocktail menu will change regularly according to the fruits and vegetables in season at the time. Elixir also has a stock of homemade fruit-infused vodkas. The Elixir team has gone to extremes to ensure the perfect cocktail, including a special ice machine that produces uniform-sized cubes that melt slower to avoid watered down drinks. Cocktails average $10.

A complete gut rehab of the former space, Elixer was designed by Nick Bowers + Di-Zin, the architectural firm behind the design of Epic Sky, a rooftop bar in downtown Chicago, and Lillie's Q, a BBQ-style restaurant in Wicker Park.

In preview, Elixir is one of the more glamourous establishments in Boystown with high ceilings, exposed brick,and accordion-style windows similar to those at Halsted's, which make for good people-watching.

Elixir's concept has been in development for well over a year now, ever since the retail space next door became available last year, says Matthew Schroeder, manager at Hydrate. Liberson has been looking to expand his businesses, and opening Elixir Lounge was the right concept at the right time – an opportunity that just couldn't be passed up.