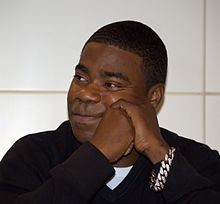 photo credit // wikipedia.org
Nashville - A man who was in the audience at a recent Tracy Morgan show in Nashville said that the well-known comedian and 30 Rock actor went berserk when talking about how he'd treat a gay son: 'I'd kill him.'

Audience member Kevin Rogers, who is gay, wrote about the June 3 show on Facebook:

"I've been a big fan of his since his days at SNL. The show was your typical hysterical [expletive-laden] humor... I have to say it was hilarious and well worth at least 40% of the $86 we spent per ticket to see him. I figured at some point the gay jokes would fly and I'm well prepared for a good ribbing of straight gay humor," Rogers wrote.

However, Rogers said that this didn't feel like humor; Morgan's whole demeanor changed when he started in on the gay jokes and that he seemed "truly filled with hate against us."

"He said if his son that was gay he better come home and talk to him like a man and not [he mimicked a gay, high pitched voice] or he would pull out a knife and stab that little N (one word I refuse to use) to death," Rogers wrote. "Tracy then said he didn't fucking care if he pissed off some gays, because if they can take a [expletive] dick up their ass... they can take a [expletive] joke.

Rogers said that of the 2,000 people in the audience at the Rhyman Auditorium, about a dozen people walked out.

According to Rogers, Morgan continued his homophobic rant saying Barack Obama needed to ‘man up' and stop speaking out for gay rights.

Truth Wins Out Social Media Director Evan Hurst said that if these allegations are true, Morgan went too far.

"Comedians have long pushed the envelope in tackling controversial subjects," he said. "Indeed, it's part of their job description, and good comedians are able to do this and keep everybody laughing at the same time. However, abject hatred directed at vulnerable kids is not comedy, by anyone's definition. If these reports are true, we expect a full explanation and apology."

The group also called on 30 Rock producer and star Tina Fey, who is a gay rights ally, to ‘forthrightly condemn any sort of anti-gay hatred'.

The theatre issued a statement: "The Ryman Auditorium regrets that people were offended by statements made by Tracy Morgan during his June 3 appearance. The Ryman does not control the content presented by people appearing on its stage, nor does it endorse any of the views of, or statements made by, such persons."