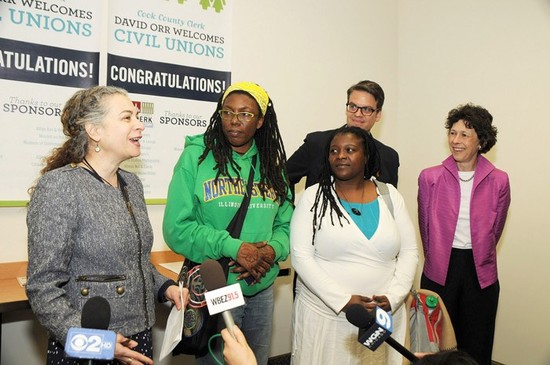 photo credit // frank failing
Chicago, IL - Chicago activist Rick Garcia, who has worked tirelessly for social justice and gay rights in Illinois, witnessed some of his efforts become reality Wednesday morning. Garcia was present at the Cook County Clerk's office in downtown Chicago as hundreds of gay and lesbian couples registered for civil union licenses for the first time in his home state.

The longtime gay rights activists shared some of his thoughts on this landmark day in Illinois' LGBT history with ChicagoPride.com.

"As I stood in the Cook County Clerk's office,seeing the line of couples coming in to get a civil union license I was overwhelmed. I could barely see the first couple get their license through my tears.

For me this is where the rubber hit the road.  We worked hard to get this bill passed and just as hard to keep it from getting gutted. But, today, I saw real people who need and deserve real recognition and protection.  It is a great day not only for the LGBT community of Illinois but all residents of Illinois.

I especially am grateful to the ACLU and The Civil Rights Agenda who were in our Statehouse all spring to make sure that the attempts to gut this bill failed. We owe them a huge debt of gratitude."

Progress on the bill did not happen overnight or without a lot of hard work by Garcia and other gay rights activists and advocacy groups, including The Civil Rights Agenda and Equality Illinois, a group Garcia co-founded, but is no longer associated.

After a one day waiting period, couples that registered on Wednesday can begin ceremonies as early as Thursday, June 2.