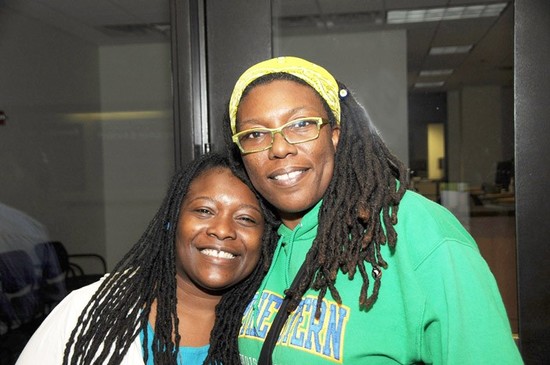 Chicago, IL - Janean Watkins and Lakeesha Harris will remember today for the rest of their lives. The couple who camped out overnight in downtown Chicago became Cook County's first couple to register for a license to form a civil union in Illinois.

"It means so much for us in general, it's solidification of our relationship," Watkins added. "I mean we've waited so long."

The couple has been together for almost 11 years and has six children.

Watkins explained, "It's for our family and of course, I love this woman. People need to know that families like ours aren't so different as others."

"We've waited to have this moment, it's the moment," she concluded.

After a planned ceremony on Thursday, the couple will have a small reception at their apartment before traveling to New Orleans in celebration.

Watkins and Harris' application, which took about ten minutes, was followed by more than a hundred other applicants this morning.

"As I stood in the Cook County Clerk's office, seeing the line of couples coming in to get a civil union license I was overwhelmed," Rick Garcia, a longtime gay rights activist and a leader in the civil unions movement, told ChicagoPride.com. "I could barely see the first couple get their license through my tears."

In a short statement, Metropolitan Water Reclamation District Commissioner Debra Shore told the crowd, "Today, the engine of government says that we will move toward justice, towards fairness, toward equal protection under the law."

Cook County Clerk David Orr is on assignment in Macedonia as an election monitor and was unable to attend.

"This is a day long in the making. Congratulations to the happy couples," Orr said in a released statement.

Couples began lining up overnight and by early morning over a hundred had gathered to enter the city's Vital Records office, which opened early in anticipation of a rush. The Cook County Clerk's office of Vital Records will remain open until 7 p.m.

Nancy Ryherd and Linda Schroeder, a lesbian couple in Macon County, were the first to get their license in the state at 12:01 a.m. Steve Bean, the Macon county clerk, opened his office doors at midnight.

Civil unions insure a broad range of rights, including hospital visitation rights, right to inherit even if the deceased didn't leave a will, and right to access spousal health insurance benefits provided by employers.

Couples receiving their license today must wait at least one day before the ceremony is to be performed. The license expires 60 days after being issued.

The City of Chicago plans a celebration of civil unions on Thursday when 30 same-sex couples gather in Millennium Park for a ceremony in their honor. Illinois Gov. Pat Quinn and Chicago Mayor Rahm Emanuel plan to attend.

Illinois will be the sixth state to allow civil unions. Hawaii and Delaware have passed civil union laws that have not yet been enacted. Civil unions are not recognized by the federal government.