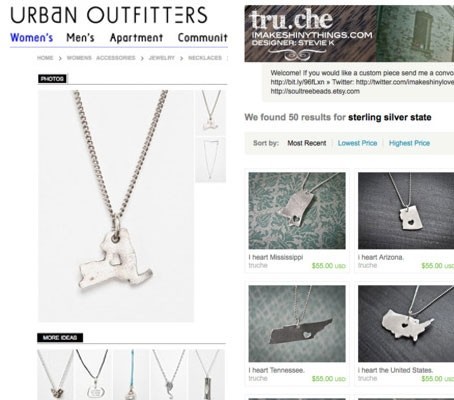 Miley Cyrus is taking to Twitter to criticize fashion store Urban Outfitters after accusations the company ripped off a Chicago designer's neckless line.

"Love that everybody is hating on Urban Outfitters," the pop singer and former star of Hannah Montana first tweeted.

Then the 18-year-old Cyrus said, "Not only do they steal from artists but every time you give them money you help finance a campaign against gay equality."

"IF WE ALLOW GAY MARRIAGE NEXT THING U KNOW PEOPLE WILL BE MARRYING GOLD FISH' – Rick Santorum UO contributed $13,000 to this mans campaign," the singer added.

Urban Outfitters president Richard Hayne and his wife contributed $17,350 to Santorum and his Fight-PAC over the course of his U.S. Senate career, according to the website OpenSecrets.org.

The controversy over the neckless erupted on Wednesday when the independent jewelry designer, Stevie Koerner, posted photos of her World/United State of Love line, which she has been selling for two years at etsy.com, next to a neckless by Urban Outfitters - both share striking similarities.

The Philadelphia-based Urban Outfitters has not responded, but sales of the alleged necklace knock-off have reportedly halted at UO stores.