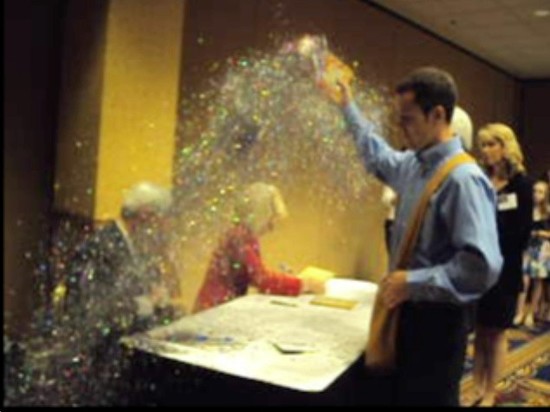 gingrich pranked with glitter during visit to minnesota

Minneapolis, MN - Republican presidential candidate New Gingrich and his wife Callista were showered with sparkling confetti by a gay rights protestor during a book-signing visit to Minnesota on Tuesday.

"Feel the rainbow, Newt. Stop the hate. Stop anti-gay politics. It's dividing our country and it's not fixing our economy," Nick Espinosa, a protestor, said as he dumped the box full of glittering confetti on the couple.

The 24-year-old political prankster said he was protesting the proposal to ban gay marriage in Minnesota.

"I don't think a free will adulterer like Newt has any ground to stand up while telling others who they can and can't love," said Espinosa after the political prank.

The 67-year-old Gingrich continues to struggle over conservative voters after two divorces and marital infidelities.

Gingrich later joined Tea Party favorite Rep. Michelle Bachmann at the Minnesota Family Council and Minnesota Family Institute meeting in downtown Minneapolis, which drew an audience of about 650. The top political item on the groups' agenda is getting the Defense of Marriage Act on the Minnesota ballot.

"It's significant as part of the social values argument that we are having as a country -- whether or not traditional religion matters," Gingrich told Fox-affiliate KMSP-TV.