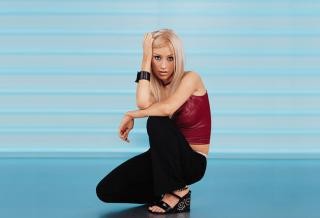 Gay Walk of Fame part of The Abbey's grand re-opening

West Hollywood, California - Singer Christina Aguilera became the first inductee into West Hollywood's new Gay Walk of Fame on Wednesday as she placed her hand and foot prints into cement to be immortalized as a gay icon.

The 30-year old singer, who is recently divorced, was recognized for her positive contributions to the lesbian, gay, bisexual and transgender community and for speaking out in support of equality.

Stevie St. John, representative for the Los Angeles Gay and Lesbian Center told RadarOnline: "We're proud of Christina, who's always supported causes important to (gay) people. We applaud her for speaking out in favor of equality and working to support the community."

The Gay Walk of Fame is the new attraction for West Hollywood restaurant, The Abbey, and is part of the bar's grand re-opening.

The legendary gay hotspot was a favorite of screen legend Elizabeth Taylor.

Aguilera recently admitted to getting bedroom advice from her gay friends.

"Who's better at giving advice, gay or straight guys? Well that depends on the advice you're looking for," she said. "If it's bedroom-related, my gay friends are the best. They just lay it out there!"

The ceremony comes a week before Aguilera becomes a judge on the new TV talent show, The Voice.