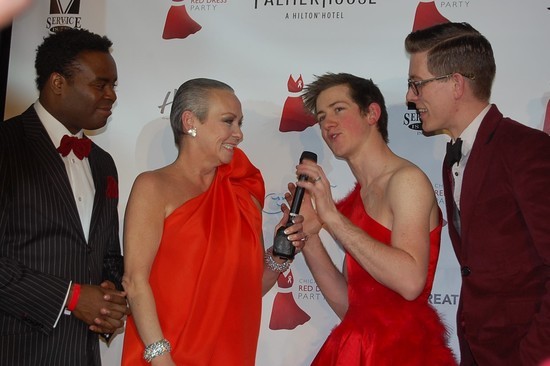 photo credit // anthony meade
Chicago, IL - They came, they saw and they wore red. With the reviews now in for Chicago's first-ever Red Dress Party, held Saturday, April 16 at 525 W. Monroe, the event was a clear success in its effort to continue an ever-expanding national tradition of raising awareness of the HIV/AIDS epidemic and funds to counter its continued spread.

According to Kyler Powell, the party's executive producer, the event attracted some 300 eager partygoers -- almost all of whom decked out in their crimson attire of choice -- and raised approximately $20,000 for the AIDS Foundation of Chicago and the Equality Project. While these numbers fell short of their lofty goals, Powell said it was an impressive showing for its first time out of the gate nonetheless.

"We were a little short, but it's still really good for the first year of the event in Chicago," Powell told ChicagoPride.com. "We're still really proud of what we did when compared to how other cities hosting the Red Dress Party did in their first year. The event went really, really well."

For comparison's sake, in its debut in 2001, the original (and now largest) Red Dress Party in Portland, Ore., only hosted some 75 guests. The party, then, marked the public extension, as the legend goes, of a promise made between two men who had both contracted the HIV virus in the early 1990s: When one of the men passed away, the other would wear a red dress to his funeral. That promise lives on in parties held throughout the country today.

But success is not only measured by the number of figures written on a check. The goal of the Red Dress Party, Powell added, is indeed two-fold: In addition to raising funds for organizations working to better the lives of those living with HIV/AIDS and help prevent the virus's spread into affected communities, the event is intended to bring the issue out of the shadows.

As some 30 years have passed since the virus was discovered, medications have been developed that help lengthen the lives of those infected with HIV. And while largely a positive development, such progress has also led to a certain level of complacency, even as new HIV infections hold steady, particularly among men who have sex with men and in African-American and Latino communities. It is estimated that more than a million people are living with the virus in the United States today.

"I'm really proud of all the work everybody put into this event to help raise the visibility of HIV/AIDS issues," Powell said. "I think the issue has become somewhat complacent in society and events like this bring the issue back to the forefront. I'm proud of everyone in Chicago for showing up and supporting the cause."

And for those who missed out, Chicago Red Dress Party, version 2.0, is already in the works for April 2012.