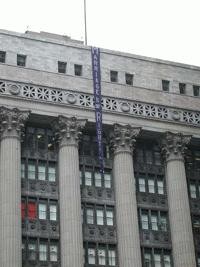 Chicago, IL - Gay marriage became reality Monday as same-sex couples in Massachusetts began to exchange vows. At the stroke of Midnight on Monday, Massachusetts became the first state in the country to legalize gay marriage and shortly after 9:15 a.m. (ET), the ceremonies began.

While Chicagoans celebrated the victory for marriage equality in Massachusetts, about 300 supporters of same sex marriage rallied outside the Cook County building hoping to persuade the city and state to follow Massachusetts' lead.

Under chants of “marry us or marry no one,” activists went inside to the Cook County Marriage License Bureau where same-sex couples tried to register for a marriage license but Cook county officials refused to issue marriage licenses telling the couples it was impossible under Illinois law. Protestors remained in the county office where marriage licenses are issued until 5 p.m. Monday, effectively stopping business. Activists plan to return tomorrow Tuesday at the start of business.

Before enterting the building, gay activists, from part of DontAmend.com, and a local coalition, Equal Marriage NOW!, managed to drop a 70 foot banner from the Cook County Building/Chicago City Hall that read "Marriage is our Right."

Cook County Clerk David Orr says he supports same-sex marriage adding that it’s time for activists to take the fight from the streets to the courthouse and statehouse. Illinois is one of the most restrictive in the country when it comes to same-sex marriage.

As the same-sex marriage debate continues nationwide and in Chicago, State Representative Randy Hultgren (R) of Wheaton is in the process of drafting a resolution that clarifies and re-affirms Illinois law on marriage as being that between a man and a woman. Nationally, President George W. Bush reissued his call for a Constitutional ban on same-sex marriage.