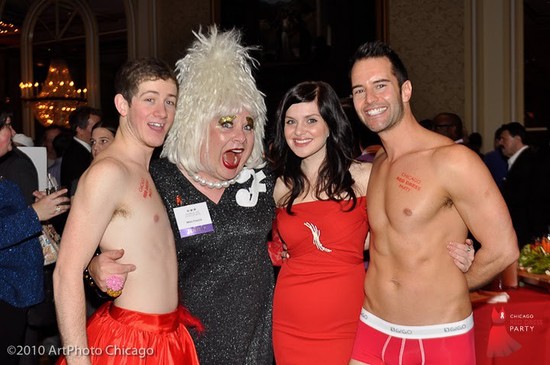 Chicago, IL - The history of the Red Dress Party reads like a piece of gay folklore: First held in Portland, Ore., in 2001, the unique HIV/AIDS fundraising party marked the fulfillment of a promise forged between two men who were dating at the time they both contracted HIV in the early 1990s. Their promise: When either of them passed away from the deadly virus, the other would attend his funeral wearing something a bit more daring than the standard-issue, mournful black: A red dress.

Since that first event in Portland, the Red Dress Party has expanded significantly, raising thousands of dollars for HIV/AIDS service organization and keeping the mens' promise alive. Parties inspired by the West Coast original have sprang up in places like Seattle and New Orleans and, as of Saturday, April 16, Chicago will join in on the fun with its first ever Red Dress Party, to be held at 525 W. Monroe, benefiting the AIDS Foundation of Chicago (AFC) and Equality Project.

The party's executive producer Kyler Powell told ChicagoPride.com the event has been in the works for nearly two years, not long after Powell moved to the Windy City from Washington state. There, he worked as an event producer and activist, organizing the state's largest-ever LGBT rights rally, in opposition to the passage of California's Proposition 8, and worked with the organization Equal Rights Washington.

And though the Chicago Red Dress Party is the first event Powell has produced in the city, his goals for the party are undeniably ambitious: He hopes to raise $30,000 over the course of the event -- a marker that the Portland event took four years to hit. He said they were expecting some 800 attendees.

"Our biggest goal is just to get people there to raise funds for these non-profits," Powell said. "We're coming out of the gates running and we're really hoping to get a lot of people behind this cause."

Attendees of the event are encouraged to dress in their "best red attire," though the party's publicist Ryan Beshel added that they are taking a more relaxed approach to the dress code than other Red Dress organizers have taken. The most recent Portland party, for example, had a theme of "Redrum" (a reference to the Stanley Kubrick horror classic The Shining) and attracted some often bizarre takes on the red dress.

While ticket-buyers in Chicago -- men, women and all who identify somewhere in between -- are encouraged to wear the garment that is the party's namesake, they are not required to do so. Beshel mentioned a red suit, shirt or even a bowtie as acceptable wardrobe alternatives.

"Even if you don't want to wear a red dress, you can still feel included," Beshel said. "We want everyone to feel included who wanted to give to come and celebrate how they would like."

In addition to having an opportunity to dress in the color that represents purity, joy and celebration in many cultures, party attendees will enjoy an open bar, food, a musical performance by well-known recording artist Kristine W, a dance party DJed by DJ Harmonix with DJ Jeanette plus appearances by local media figures Candace Jordan, of Candid Candace fame, and Marcus Riley of NBC Chicago. ChicagoPride.com's own Miss Foozie will also be at the event, greeting visitors on the event's red carpet.

And the organizers have also made an effort to keep the party's price-point low and its atmosphere less stuffy than black-tie fundraisers can sometimes be. General admission tickets are available in advance for $80 (or $130 at the door), while VIP packages offering bottle service, early admission, Kenneth Cole goodie bags and a meet-and-greet with Kristine W are also available for those who are interested.

Beneficiary AFC is one of the city's leading HIV/AIDS service organizations and was founded in 1985, playing a significant role in collaborating with other organizations throughout the city to help fight the virus and improve the lives of those affected by it. Equality Project, founded in 1998, is an organization that aims to create social events that also inspire social consciousness and political involvement.

Visit www.chicagoreddressparty.org for tickets and more information on the Chicago Red Dress Party.