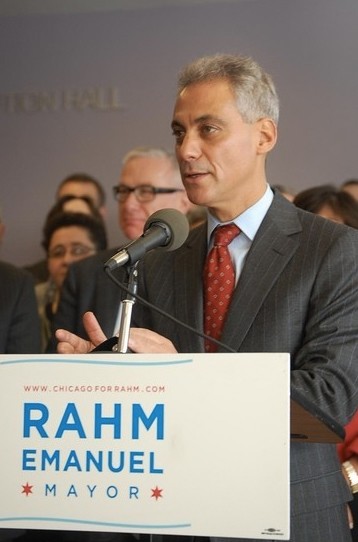 Chicago, IL - With less than a week to go before the election that decides who will become Chicago's first new mayor in over two decades, the time has officially arrived for any remaining undecided or unengaged voters out there to sit up and take notice: The race to succeed Mayor Richard M. Daley has approached its finish line and our community has an undeniably vested interest in the course that the Windy City charts under whichever new administration takes the reigns next week.

The past week has been an expectedly busy time in the mayoral race, so here at ChicagoPride.com we wanted to take this opportunity to present one final round-up of updates relating to LGBT developments in the Chicago mayoral election, wrapping up our exclusive coverage of this historic race. We hope that you will take advantage, if you haven't already, of our profiles of the four leading candidates in the race - Rahm Emanuel, Gery Chico, Miguel del Valle and Carol Moseley Braun.

LGBT candidate forum held despite double-booking
Last Wednesday, Feb. 9, three of the leading candidates appeared at the Adler School of Professional Psychology for a mayoral forum focused on LGBT issues and sponsored by a coalition of some 32 different organizations. Because of a last-minute double-booking with a rescheduled debate sponsored by the Chicago Defender (who had canceled their previous engagement due to the blizzaster earlier in the month), all of the candidates scrambled in their attempts to make both events, with Emanuel, Braun and del Valle ultimately doing so.

Chico - who was scheduled to speak later in the LGBT event than his three main rivals - was unable to attend both events, but greeted attendees as they entered the building before leaving for the Chicago Defender forum.

Each of the candidates spoke individually for some 10-15 minutes in response to five similar questions relating to LGBT issues before offering a final statement. The questions related to specific concerns regarding HIV/AIDS funding, public safety, transgender issues, education and youth homelessness and were met, for the most part, with general, less detailed responses from the candidates.

Speaking first, Emanuel described his mayoral philosophy as one that would be actively concerned with LGBT issues, particularly in protecting HIV/AIDS funding throughout the city and ensuring that the next police and school superintendents share his concern for the community. Concluding his comments, he spoke to a goal of bringing all of the city's many factions together under "common purpose."

"I look around this room here and I see the promise of Chicago in all its diversity," Emanuel said. "But remember one thing I want to do as mayor is bring the city together as one because when you face those common challenges - whether be they our school system, whether they be our fiscal situation or whether they be our crime problem - ... they have to be met with common purpose. That is how we will be a stronger city as we get to work through the challenges that we face."

Next, Braun addressed the audience of some 200, speaking with arguably the most detail on her plans to address LGBT concerns within her theoretical mayoral administration, including the appointment of an LGBT liaison team within Chicao Public Schools, but making a contentious point about HIV/AIDS funding being focused on the North side. The former U.S. senator promised to continue to lead on queer issues if elected mayor.

"I have been there on the floor at the forefront with these issues consistently, without wavering and I say the exact same thing on these issues while on whatever forum I may be," Braun said. "I will work with you, consult with you and we will work together to make this the friendliest city in the entire United States of America, San Francisco included, for the LGBT community."

Finally, del Valle focused on his support for queer causes, including his fight to protect HIV/AIDS outreach funding for minority communities while he was a state senator, and his hope to transform Chicago into a truly "world-class city" with "world-class neighborhoods."

"It can be done with your help and the help of many others who are out there," del Valle said, "whose voices are being drowned out by multi-million dollar campaigns from people who want to pay to influence and want to set the agenda for this city and are not interested, not a whole lot, in what happens in the many neighborhoods in the city of Chicago who have been waiting for this opportunity to have a real voice in an election that gives them real choices."

A full report on the mayoral forum - in addition to an on-demand video stream from Radio Arte - can be found over at the Windy City Times, in case you missed it the first time.

Project aims for LGBT mayoral appointments
Also announced last Wednesday was the Chicago Appointments Project, a new campaign collaboration between Equality Illinois, the Human Rights Campaign and the Gay & Lesbian Leadership Institute. The project's intention is to identify, recruit and advocate for the appointment of well-qualified, openly LGBT people to positions within the next mayoral administration.

The project is modeled after the Presidential Appointments Project, which has led to the appointment of some 150 openly LGBT people to positions in the Obama administration. Interested applicants can check out www.eqil.org/appointments.html.

EQIL, HRC endorse Emanuel
Both the Equality Illinois PAC and the Human Rights Campaign also made headlines this week with their endorsement of Emanuel in the mayoral race. In a statement from Equality Illinois, its PAC chair Art Johnston said, "Rahm Emanuel has articulated a clear vision for the City of Chicago, in which lesbian, gay, bisexual, and transgender people are fully included and involved in every level of governance."

In an HRC release, president Joe Solmonese said, "Rahm Emanuel has been a champion for equality throughout his career in public service ... His dedication to the LGBT community and his commitment to fairness for all Chicagoans makes him a stellar choice for Mayor."

HRC and Equality Illinois' endorsements build on the momentum initiated by the more than 200 LGBT community leaders and activists who joined together to form the LGBT and Allied Committee for Rahm Emanuel in a ceremony late last month at the Center on Halsted.

Other LGBT groups release mayoral guides
But not all LGBT groups in the city have sided with Emanuel, of course. While not specifically endorsing any candidates, grassroots queer organization Gender JUST released their own mayoral candidate scorecard on Tuesday, offering letter grades to all six remaining candidates on their responses to five questions pertaining to education, resource equity, criminal justice, reproductive justice and the communities' general concerns.

Both Emanuel and Chico received several low marks including Ds and Fs. Del Valle fared the best of any of the leading candidates, earning mostly As for his support for many progressive causes including, but not limited to, many of the chief concerns of LGBT Chicagoans.

Gay out the vote
The most recent poll in the race, released Tuesday by the Illinois Retail Merchants Association, shows Emanuel leading the pack with 58 percent support of likely voters. Chico has pulled ahead into second place - with 24 percent - while del Valle and Braun follow with 10 and 6 percent respectively. In another poll, released by the Chicago Tribune/WGN last week, Emanuel had 49 percent support, leading Chico (with 19 percent support) by some 30 percentage points. If no candidate is able to surpass 50 percent support in Tuesday's election, the election will head to a two-candidate runoff vote on April 12.

Finally, it's worth noting that one statement included in our candidate profile of del Valle, published last month, is no longer accurate. According to a comment posted in response to a Chicago Now story, del Valle's campaign website was updated the day after ChicagoPride.com published his campaign profile to include his platform on LGBT issues. At that point, del Valle was the only major candidate in the race who had not published such a platform on their campaign website.

Regardless of which candidate you choose to support in this race, it's crucial that you get out the vote next Tuesday. And after this election, we encourage you to remain involved with the democratic process, not just submitting your ballot next week, but holding whichever candidate emerges as the city's new mayor accountable for the promises they made to our communities on the campaign trail.

Thanks for reading Race for Mayor, The Gay Vote and remember: Nothing, and I truly mean nothing, is sexier than an informed voter.