On the candidates: Carol Moseley Braun 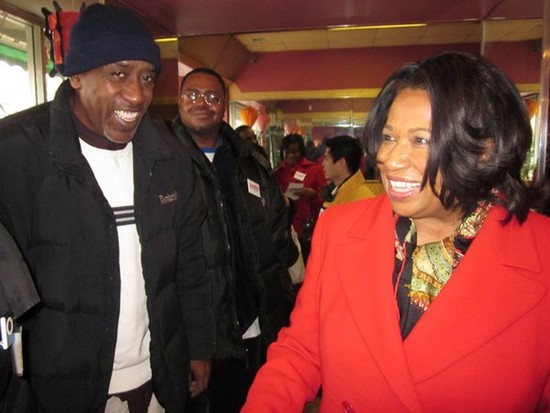 Chicago, IL - While Chicagoans begin to dig out from one of the largest snowfalls in recent Windy City history, the mayoral race wages on as the candidates continue to seek support wherever they can find it -- including the city's LGBT communities.

In deference to the role the LGBT vote is likely to play in the Feb. 22 election, all six remaining candidates -- including the Four ChicagoPride.com is profiling in this series -- have confirmed their attendance of the Feb. 9 community forum on LGBT and HIV/AIDS issues, according to a Feb. 1 press release. The forum will be held at the Adler School of Professional Psychology and is expected to take place beginning at 6 p.m. Space is limited and the over 20 community groups who have participated in the forum organization are said to be handling RSVPs. The Chicago Black Gay Men's Caucus is also hosting their own meet-and-greets with the leading candidates this month.

Before those events, however, ChicagoPride.com still has two more candidate profiles to unveil, including this week's subject: Former U.S. Senator and U.S. ambassador to New Zealand Carol Moseley Braun. Braun's name has always been toward the top of the list of candidates in this race, but her campaign has come under fire in recent weeks due to some heated comments made about other candidates. Most recently, Braun said lesser-known candidate Patricia Van Pelt-Watkins was "strung out on crack" for the last 20 years in forum at the Trinity United Church of Christ on Jan. 30. Braun has since apologized for the remark, but many pundits suggest the comment is further proof of her unpredictable, un-mayorly temperament.

Braun also has received some negative attention in the race for -- literally -- phoning in an appearance at an LGBT event in the Loop last month -- an event she later claimed she didn't know about -- and also initially refusing to release her tax information, which all the other candidates in the race had done. A comment last week to leading contender Rahm Emanuel -- "Let's talk about tampons." -- provided another of the mayoral race's more unhinged moments. Nonetheless, Braun has a strong history on LGBT issues in the city, state and nationally, including her 2007 induction as a "friend of the community" in the Chicago Gay & Lesbian Hall of Fame. Below, learn more about her record on the issues that matter and her plans for the city.

The basics: Braun, 63, was born here on Chicago's South Side and has a deep political resume. After serving as a prosecutor in the U.S. Attorney's Office in Chicago from 1973-1977, Braun was elected to the state House of Representatives in 1978 and served for 10 years before being elected to the post of Cook County Recorder of Deeds. She was later elected as the first African American woman to the U.S. Senate in 1992 and served there for one term, until she lost her re-election campaign in 1998. Braun was finally appointed to the U.S. Ambassador to New Zealand by then-President Bill Clinton. Braun's one marriage ended in divorce in 1986 and has one son, Matthew.

On the record: While a member of both the Illinois House of Representatives and particularly during her time as a U.S. Senator, Braun was a strong advocate for LGBT equality. Braun was the first Senator to appoint an LGBT liaison to her campaign and staunchly opposed to both the "Don't Ask, Don't Tell" military compromise on the service of gay and lesbian soldiers -- alongside only 11 other Senators -- and the Defense of Marriage Act. As a state representative, she supported employment non-discrimination and hate crimes legislation. She has been a long-standing and vocal supporter of marriage equality and, while a Senator, was one of the more pro-choice voices in Washington, recently earning her the endorsements of both Planned Parenthood Illinois and Personal PAC.

In a recent Windy City Times interview, Braun addressed her long history of championing LGBT issues, saying, "I've been there consistently over the years. Yet, I find myself having to revisit all of that and remind people of those fights and contributions, because a lot of people just don't know."

Her LGBT platform: Braun's mayoral platform on LGBT issues is quite strong and relatively thorough, their her response to the mayoral community coalition's questionnaire reveals some vague responses and fundamental misunderstandings of how the city currently operates.

In Braun's responses regarding education, she promises to appoint a new Chicago Public Schools superintendent -- as well as an LGBT liaison team -- with a sensitivity to LGBT issues and a dedication to addressing anti-gay bullying in schools. Her proposal to address HIV and STI prevention issues and other LGBT topics in the classroom may be in opposition to current state law, which provides funding strictly for abstinence-only sex education -- her plan, unlike del Valle's in particular, does not acknowledge this obstacle.

Braun's responses to increasing the level of LGBT sensitivity within the city's fire and police departments is similar to other candidates' proposals but does not acknowledge the current role that the Chicago Police Department LGBT liaison plays in the community -- rather, both her questionnaire response and platform seem to suggest a lack of knowledge that the position even exists. While the effectiveness of the CPD LGBT liaison has been admittedly questionable, this oversight is strange for a candidate who claims to be in touch with the city's queer issues.

Her platform on LGBT issues does not specifically address trans Chicagoans, though her questionnaire response indicated her position that "municipal support for the transgender community begins with educating the public about the issues."

These issues aside, Braun has strongly-worded suggestions to sustain the funding of HIV/AIDS programs in the city, to pursue a thorough needs assessment for LGBT elders services and to expand the role (and funding) of the mayor's Advisory Council on LGBT Issues.

The prognosis: Polling data throughout January has seen Braun's level of support take a definite downward angle -- from the height of 26 percent support from likely voters in a Jan. 7 Teamsters poll to only 11 percent in a Jan. 25 Chicago Retail Merchants Association poll. Her recent campaign gaffes -- in addition to trailing both Emanuel and Chico in fundraising -- have also not helped her campaign pick up steam. The most recent, weekly mayoral odds from NBC Chicago's Ward Room, updated Jan. 28, reported the odds of a Braun win at 10-1 and heading downward.

Trading in trivialities: Braun launched a line of organic coffee, tea and spices called Good Food Organics and its main brand Ambassador Organics in 2005 ... In 2004, Braun campaigned for the Democratic nomination to run for President. During her campaign, she stopped by 'The Daily Show' for an interview where she flashed the Trekkie gesture and spoke of her unique position as the only Democratic candidate who had been to the South Pole ... Braun comes from a family filled with musicians -- her father Joe was a policeman, as were all of his brothers, but played in a jazz ensemble at night, according to a lengthy Chicago Reader profile from 1992.

According to the Zodiac: Braun was born on August 16, making her a Leo. Leos are known as the most extroverted, creative and dominant of all the Zodiac signs. Leos tend to be quite idealistic, generous and warmhearted, as well as patronizing, bossy and intolerant at times. Napoleon, Benito Mussolini, Fidel Castro and Bill Clinton are among the most well-known Leo political leaders.

Race for Mayor, The Gay Vote: Visit www.carolforchicago.com for more information on Braun's campaign and visit Equality Illinois' "Next Mayor" page to read the questionnaire responses from Braun and the other leading candidates. Read CP's profiles of Rahm Emanuel and Miguel del Valle. Next week, we'll conclude our profiles of the major candidates with attorney and former CPS head Gery Chico's record on LGBT issues and plans for the city.