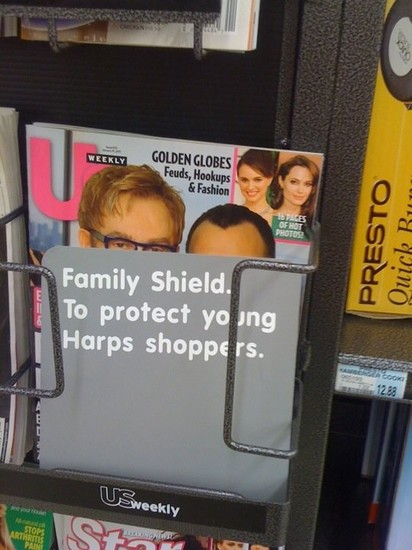 Harps Supermarket, located in the small town of Mountain Home, Arkansas, seems to have censored the front cover of that particular issue with a placard, generally used to cover pornography magazines, that reads: "Family Shield. To protect young Harps shoppers."

The photo, which is widely being circulated on the internet, was tweeted by user Jennifer Huddleston (JennHudd) on Tuesday.

"This was taken at my local grocery store. I was shocked and horrified. Can you help bring attention to this," she tweeted. "They are saying they need to keep children from seeing it, because it is a gay family."

Ironically, an Arkansas judge in April struck down that states voter passed ban against unmarried couples adopting or foster-parenting children.

GoPride.com contacted the Mountain Home store where a manager, who did not give his name, would not confirm the magazine was covered and refused further comment.

UPDATE: The Gay and Lesbian Alliance Against Defamation (GLAAD) contacted the Harps corporate office in Springdale, Arkansas on Wednesday afternoon and Marty Yarborough, a corporate executive assistant, indicated the shields were put over the magazine cover at this store after "several" customers complained.

Harps is a regional grocery chain with over 60 locations in Arkansas, Oklahoma and Missouri.

Mountain Home, which is located in north-central Arkansas, has a rich history of intolerance.

No word from Us Weekly concerning the magazine cover that's caused such a controversy.