On the candidates: Rahm Emanuel 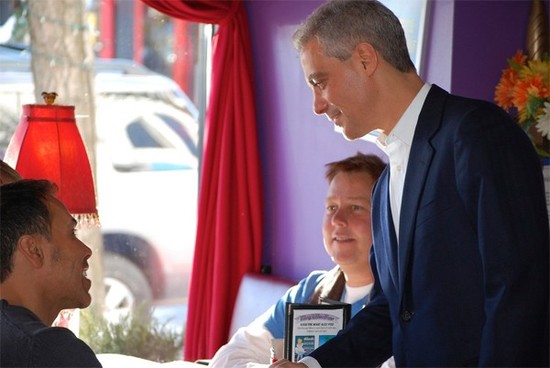 Race for Mayor, The Gay Vote

Chicago, IL - In the month that has passed since ChicagoPride.com launched its exclusive coverage previewing the city's upcoming mayoral election, the field has narrowed -- both James Meeks and Danny Davis have exited the race -- and the contest has kicked it up a notch as the remaining contenders scurry for endorsements and face time in front of voters. The result: A seemingly non-stop flurry of headlines and blog posts speculating over poll results, past alliances, campaign gaffs and the like.

But somehow lost among the heated coverage are some of the issues that matter most to the race: Who are these candidates, what are their plans for our city and -- finally -- what is the likelihood they will carry out campaign promises should their City Hall name plate be minted next month. As an effort to provide a one-stop shop for information, ChicagoPride.com will be profiling each of the four major mayoral candidates in the race -- Rahm Emanuel, Miguel del Valle, Carol Moseley Braun and Gery Chico -- in ballot order. The series will culminate the week of Valentine's Day in our final voter's guide to the contest, with community leaders weighing in on the race one final time.

Waiting to hear from the candidates live, in person on LGBT issues? ChicagoPride.com has received word that an LGBT-focused forum featuring the candidates has currently been slated for Wednesday, Feb. 9, from 6-8 p.m. at the Adler School of Psychology, 17 N. Dearborn.

The basics: Emanuel, 51, is a native of the North side of Chicago, representing the city's 5th District in the U.S. House of Representatives from 2003-2009, a seat now occupied by Mike Quigley. He and his wife Amy Rule have three children and live in the Ravenswood neighborhood. He first entered politics while working for Paul Simon's successful 1984 U.S. Senate campaign and was later chief fundraiser for Richard M. Daley's 1989 mayoral campaign. He also served as senior advisor to President Clinton from 1993-1998.

On the record: While in Congress, Emanuel had an undeniably strong voting record on LGBT issues, earning a 100 percent rating from the Human Rights Campaign. He was also rated at 94 percent by the NAACP. He voted yes to prohibit job discrimination on the basis of sexual orientation and no on defining marriage as between one man and one woman in the Constitution.

While in the White House, under both the Clinton and Obama administrations, however, some community leaders have criticized Emanuel as complicit on some "foot dragging" on issues like the recently achieved repeal of Don't Ask Don't Tell in the military and the dead-for-now passage of a transgender-inclusive Employment Non-Discrimination Act (ENDA). In a Medill News Services story, Equality Illinois co-founder Rick Garcia said "[p]eople see Rahm's fingerprints all over [the foot dragging]."

Further, in response to a question about ENDA in a Windy City Times interview published in December, Emanuel quickly changing the topic and avoided the core of the question. When asked, blankly, what he thought of ENDA and whether it should be gender-inclusive, Emanuel replied: "I worked to try to pass it, so that's what I believe. We first dealt with hate crimes and in Congress, when we first took over the majority, one of the things we tried to do was pass it." He, then, went on the defensive when questioned about the Obama administration and Democratic Party's slow movement on LGBT issues.

LGBT supporters of Emanuel, however, point to other achievement as signs of the candidate's commitment to the community: Emanuel helped secure a $1.25 million federal grant to support the construction of the Center on Halsted, played a role in the Obama administration's appointment of over 150 openly LGBT people to federal jobs and he worked to get an executive order, effective this week, securing hospital visitation rights for queer couples.

His LGBT platform: At this point in the race, all of the leading candidates -- excluding, at press time, Miguel del Valle -- have published LGBT platforms via their campaign websites and responded to a coalition of community leaders' call for answers to a comprehensive LGBT issues-focused questionnaire. While all the candidates have announced their support for marriage equality, their plans to address LGBT issues vary somewhat in specificity and strategy.

In addition to celebrating his own record on the issues, Emanuel's platform and questionnaire response indicate several unique ideas that both strive to continue and improve further upon Mayor Daley's support of the city's LGBT community. Firstly, Emanuel plans to elevate the status of the city's Advisory Council on LGBT Issues to reporting directly to the mayor, rather than a commissioner. He also hopes to strengthen the city's Gay and Lesbian Hall of Fame and the annual salute to LGBT Veterans, both unique programs to Chicago.

Emanuel seeks to establish a "task force" between Chicago Public Schools and law enforcement to address bullying and establish diversity training in the city's police and fire departments. He also supports launching an assessment of how the city is, or is not, meeting the needs of LGBT seniors and has vowed to make HIV/AIDS funding a budget priority while urging the city's Department of Public Health to strengthen its work with community-based prevention programs. He further discussed the possibility of pursuing "public/private partnerships" to sustain HIV/AIDS treatment and education amidst tightening city and state budgets.

Emanuel's platform does not specifically address transgender issues, though his questionnaire response noted he "will work with the community to educate the public about transphobia and help build a better life for transgender people in employment, education, public health, public accommodations and housing."

The prognosis: Perhaps no candidate in the race for mayor has attracted more attention -- or controversy -- throughout his campaign to this point as Emanuel. Although questions challenging his Chicago residency have now died down -- after he successfully survived a lengthy sit-down with city election commissioners last month -- candidates have recently challenged his role with the board of Freddie Mac, the government-sponsored enterprise that collapsed under the weight of the mortgage foreclosure crisis. A request for a review of the board's correspondence during Emanuel's tenure was rejected by the Obama administration.

Emanuel's competitors have also criticized his recent announcement of a Chicago-specific DREAM Act as pandering. Nonetheless, Emanuel has maintained an unwavering edge over his challengers in both polling and fundraising for months.

Trading in trivialities: Emanuel's youngest brother -- Ariel -- is said to be the real-life inspiration for Jeremy Piven's character -- Ari Gold -- on HBO's Entourage. Emanuel's Hollywood connection helped him net 'Dreamgirls' star Jennifer Hudson's performance at a recent House of Blues fundraiser ... Per a Time Out Chicago survey, he's a fan of Wilco, early Smashing Pumpkins and brunches at Glenn's Diner on Montrose ... He also, according to People Magazine, once sent a rotten fish to a political enemy -- part of the fiery reputation that inspired a hilarious (if that's your thing), expletive-laced Twitter wannabe, @MayorEmanuel.

According to the Zodiac: Emanuel's birthday is November 29, making him a Sagittarius (according to Western philosophies) or a Ophiuchus, the mysterious thirteenth sign recently popularized by the media's rediscovery of the Sidereel system of astrology. Sagittarius folk are known for their optimism, interest in other cultures and adaptability, but are sometimes considered to have scattered, unfocused attentions.

Race for Mayor, The Gay Vote: Visit www.chicagoforrahm.com for more information on Emanuel's candidacy and visit Equality Illinois' "Next Mayor" page to read the questionnaire responses from Emanuel and the other candidates. Next week, learn more about former State Senator and current City Clerk Miguel del Valle.