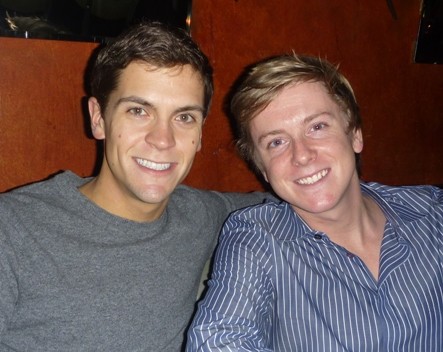 Hughes and Eldridge made the announcement at a Freedom to Marry event being held at their SoHo apartment, which included guests like Ivanka Trump, Simon Doonan, New York state Attorney General Eric Schneiderman and Jonathan Adler.

The couple, who has been together for five years, plan to get married in New York State as soon as it's legal to do so.

"As you know, we can't get married in New York, so there is more of an urgency to approve gay marriage, so we can get married here," Eldridge told guests according to the New York Post. "We're going to get married in the next year or two for sure -- we're hoping as soon as possible."

27-year-old Hughes proposed to Eldridge -- on one knee -- while they were stuck in Thailand over the holidays because of all those flight delays.

Hughes was the brainchild behind President Obama's successful 2008 Internet campaign. The couple attended a dinner at the White House last year where Obama called Hughes, "my Internet man."

The Internet entrepreneur recently launched Jumo.com, a social networking site that helps individuals find community organizations and causes that are important to them.

Eldridge is the political director of "Freedom to Marry."