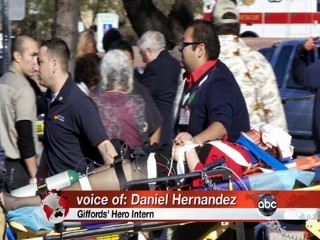 photo credit // abcnews.com
Tucson, AZ - A young intern, who had only been working for Rep. Gabrielle Giffords (D-AZ) for five days, is being described as a hero and is credited in helping save the congresswoman's life after she was shot in the head in Tucson Saturday.

20-year-old Hernandez was volunteering at the community event and was standing just feet away from Giffords when Jared Loughner opened fire on the congresswoman. Hernandez immediately rushed to her side and tried to comfort her.

"When I heard gunshots, my first instinct was to head towards the congresswoman to make sure that she was OK," Daniel Hernandez Hernandez told ABC's "This Week" on Sunday.

"I had to lift up the congresswoman, because she was severely injured, and I wanted to make sure that she was able to breathe OK because there was so much blood," he said. "We had to grab whatever we could. And because we were outside of a grocery store, the employees from the grocery store brought out smocks that are used by the meat department that were clean, so that we may use them as bandages, because that was really the only clean cloth that we had."

"The congresswoman was alert. She was able to hold my hand when I asked her if she could hear me," said Hernendez.

Hernandez, a junior at the University of Arizona, is gay and is a member of the City of Tucson Commission on Gay, Lesbian, Bisexual and Transgender Issues. "She's been a great ally to the LGBT community," Hernandez said of Giffords during an interview with the Dallas Voice.

Giffords is a member of the House LGBT Equality Caucus and is a strong supporter of gay rights, including gay marriage.

A 9-year-old girl, who was the granddaughter of former Yankees and Mets manger Dallas Green, Arizona Federal Court Judge John Roll and an aide to the congresswoman, Gabe Zimmerman, were killed in the tragic shooting on Saturday.