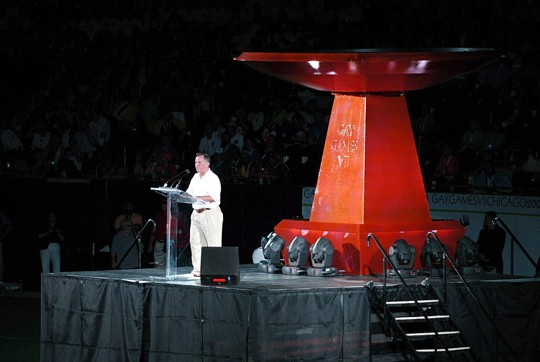 Race for Mayor: The Gay Vote

Chicago, IL - With just over two months to go before the Feb. 22 mayoral election, candidates to follow in outgoing mayor Richard Daley's footsteps have picked up the pace, launching into full-time campaigning mode and looking for support wherever they can get it, including from the city's LGBT communities.

Former White House chief of staff Rahm Emanuel continues to command a large lead over his closest rivals in the latest polling data on the race, a Tribune/WGN poll of over 700 registered likely voters released last week. But while Emanuel was backed by 32 percent of poll respondents, far outpacing former Chicago Public Schools head Gery Chico and U.S. Rep Danny Davis, tied at 9 percent each, some 30 percent of voters remain undecided.

In an effort to inform the city's LGBT voters, representatives from many of the leading LGBT organizations formed a coalition that has hosted a series of non-partisan forums addressing the race, including a Nov. 29 event at the Center on Halsted and a Dec. 6 forum in Humboldt Park. Following the completion of a third forum, expected to be held on the city's South Side later this month, the committee plans to create a questionnaire on LGBT issues to be sent to the mayoral candidates. Finally, the candidates will be invited to address their questionnaire responses and LGBT platforms in a forum tentatively planned to be held downtown in late January.

The timeline is tight, but Anthony Martinez, an organizer with LGBT Change and the new executive director of The Civil Rights Agenda, said the coalition represents a unique opportunity for LGBT people from a variety of areas of the city to contribute to the conversation of what issues are of the most urgent concern to the community. Martinez specifically noted the participation of queer voices from beyond the city's North Side has been an important proponent of the coalition's organizing.

"We are working to ensure that all communities are represented in forming this questionnaire so that we can try and provide the education and knowledge that will empower these communities," Martinez told ChicagoPride.com.

"This is about really stepping back and getting the community involved in these processes," he added. "We need to make sure our movement remains community-driven because that is the only way we'll have an impact on politics."

Julio Rodriguez, board president of the Association of Latino Men for Action (ALMA), has also been involved in the coalition, helping to organize the Humboldt Park forum which attracted some 40 attendees.

Rodriguez also hopes the next mayor will recognize that LGBT people live throughout the city and actively acknowledge that diversity. He said it was important for community leaders to hold off on endorsing candidates in the race until more information is known about their specific plans to address issues like bullying in schools and the housing instability and homelessness a disproportionate number of queer youth face -- two key concerns that have emerged in the first two community forums.

"Our position is that we need to hold [all the candidates] responsible and not just throw all our eggs in one basket," Rodriguez said. "Through this dialogue, we will see how emerges as the person we feel will really move us ahead, beyond where we are right now. We want to make sure people are informed about who is going to secure the most change in the future."

Affinity Community Services executive director Kim Hunt acknowledged that many constituents within the LGBT community have taken a "wait and see" approach to the race. She agreed the forums represent a chance to better understand where the candidates' priorities lie and said her organization would not be compromising its 501(c)(3) tax status by making an endorsement.

"Mayor Daley has been the mayor of the city my entire adult life, so this is a huge opportunity for communities across the city to have some major influence on the priority areas going forward," Hunt said. "We want our constituents from each of the organizations to have some say on what questions go forward to the candidates when it comes to that point."

While many community leaders have avoided openly supporting any candidates in the race to date, one important name has not. Rick Garcia, Equality Illinois co-founder, announced his endorsement of Chico in a Dec. 6 Gay Chicago Magazine interview. The following day, Equality Illinois, who has also participated in the forums, issued a statement that their organization "has not taken any position in support of any candidate for mayor."

Garcia reiterated to ChicagoPride.com that his endorsement of Chico was a personal one and that, while he also has great respect for fellow candidates Carol Moseley-Braun and Miguel del Valle, he sees Chico as "the [candidate] who can pull off what's best for Chicago and Chicago's gay community." Garcia denied the claims of other organizers that it was "too early" to make an endorsement in the race.

But Martinez says Garcia's personal endorsement has been seen by some in the community as an organizational endorsement by proxy. He feels it has undermined the forum process and pressured other organizations to come forward and endorse a candidate of their choosing.

"His personal endorsement as founder of Equality Illinois still carries organizational weight behind it and he has the political clout in the community," Martinez added.

The day following ChicagoPride.com's conversation with Garcia, reports emerged that Equality Illinois had severed their relationship with him and its CEO Bernard Cherkasov called police Dec. 17 to remove Garcia from the organization's office. According to a fiery Windy City Times interview, Garcia plans to "fight the firing."

In other recent headlines concerning the race, in an interview published in the Windy City Times, Emanuel confirmed his support of same-sex marriage equality and spoke to his financial push for the Center on Halsted and President Obama's hospital visitation bill. Nevertheless, some in the community have criticized his participation in the authorship of the military's Don't Ask Don't Tell policy under the Clinton administration.

Finally, candidate and state Sen. James Meeks continues to carry the mark of being the lone Democratic vote in the Senate against Illinois' recently passed civil unions legislation, and he has defended that vote. Meeks also attracted attention last week when he stated "women, Hispanics and Asians are not discriminated against" while speaking about city contract set-asides in an interview with WVON Radio.

Race for Mayor, The Gay Vote: As this race continues to heat up, ChicagoPride.com will launch a series of mayoral profiles to run on this site in the coming weeks, spotlighting each of the major candidates' past records on LGBT issues and their proposals for our city's future.