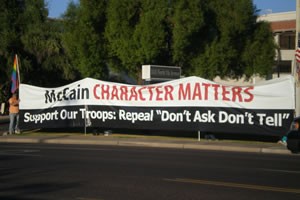 Phoenix, Arizona - Gay activists are increasing the pressure on Arizona Senator John McCain after he successfully rallied Senate Republicans to oppose repeal of "Don't Ask, Don't Tell," the 17-year-old law that allows gay troops to serve in the military provided they remain celibate and closeted.

Taking its message directly to McCain, members of the group can be seen regularly protesting outside the senator's Phoenix office.

Gruender pointed to a tense exchange last week between McCain and reporters for the gay media as evidence that McCain is "out of touch with reality" on the issue of repeal.

After Democrats failed to break the Republican filibuster, McCain, the ranking Republican on the Senate Armed Services Committee, insisted that the military does not persecute gay troops.

"Regulations are … we do not go out and seek to find out someone's sexual orientation," he said, and then, speaking to Kerry Eleveld of gay glossy The Advocate, he added, "That is the fact. That is the fact. Now, ma'am, I know the military very well, and I know what's being done. And what is being done is that they are not seeking out people who are gay. And I don't care what you say, I know it's a fact."

"Just another example of how McCain is out of touch with reality," Gruender told On Top Magazine in an email. "It is well documented that the military has used people's email, ex-lovers and other means to remove people from the military under DADT. It has been far from don't ask, don't tell, it really, at times, has been a witch hunt by the military."

"Also, if his memory would serve him, there has been lots of testimony in front of his own committee that backs up that he is wrong," he added.

Gruender said his group would continue to protest McCain so long as he continued to block repeal of "Don't Ask."