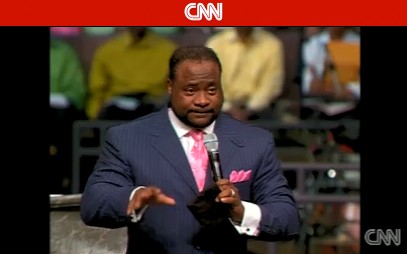 Maurice Robinson and Anthony Flagg filed lawsuits Tuesday alleging Long coerced them into having sex in exchange for cars, clothes and cash. The two men, now 20 and 21, say the powerful pastor began having inappropriate relations with them when they were just 16.

According to the lawsuits, Long instructed the young men as "spiritual sons" to "follow their master," while enticing them "with cars, clothes, jewelry, and electronics."

Long has been pastor of the 30,000-member New Birth Missionary Church in Atlanta since 1987 and is considered to be one of the nation's top and most homophobic black preachers.

Wednesday afternoon a third lawsuit was filed against Long by Jamal Paris, a member of the church. The lawsuit alleges coercion, deception and manipulation that involved a sexual relationship with a young male, according to CNN.

In 2007, the Southern Poverty Law Center called Long "one of the most virulently homophobic black leaders in the religiously based anti-gay movement."

In 2004, Long led a march in Atlanta against homosexuality.

Long, who is on his second marriage, lives a lavish lifestyle, which includes a $350,000 Bentley and a $1.4 million home.

The church was the site of the 2006 funeral of Coretta Scott King, Martin Luther King Jr.'s widow, attended by President George W. Bush. Then-NAACP Chair Julian Bond refused to attend the funeral at the church, calling Long "a raving homophobe."

Long has denied the first two allegations, a press conference is planned for Wednesday afternoon.