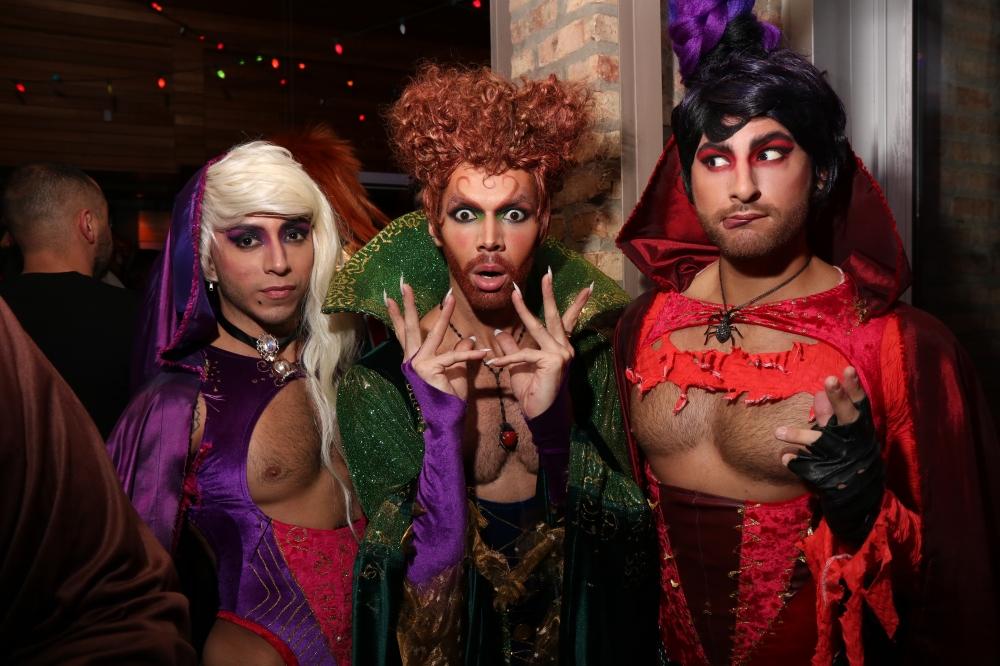 Sidetrack once again is taking advantage of the frights and sights, ghosts and ghouls, and everything spooktacular of Halloween.

“Halloween is always a busy time of year; it is so inspiring to see the creativity that people (to) their costumes,” said Sidetrack general manager Brad Balof. “The dogs in costume for (the) Sidetrack Dog Day Doggie Costume Contest is a highlight for me every year – and this year there was a huge rottweiler dressed as a bee, which I thought was so precious.

“Northalsted is the only place in Chicago to see a Halloween Parade on Halloween night. The energy is amazing. The creativity and community is inspiring.”

Chicago’s 25th annual Haunted Halsted Halloween Parade & Costume Contest, dubbed Chicago On Fire!, is free to all and starts at Halsted & Belmont at 7:30 p.m., and ends at Halsted & Brompton at 8 p.m. on Monday. The corresponding costume contest carries $4,000 in prize money.

Chicago’s Halloween is one of the 10-best Halloweens in the U.S., by Fodor’s Travel Guide, and Redfin’s No. 3 Best City for Halloween.

“I always like seeing what the Sidetrack staff comes up (with for) costumes. It’s a tricky balance to create something amazing that also is functional to work in,” Balof said. “Mad props to the door staff, barbacks and bartenders who are working through all the Halloween festivities this weekend.”

As for Balof, he’s to go as a steam-punk clown with his husband and his brother.

Halloween is, of course, celebrated repeatedly throughout the LGBTQ community. Hydrate Nightclub, for instance, is packed for the Halloween party, starting with IMMORTALS on Saturday, October 29, at 11 p.m., with the set from the ever-popular DJ Dani Brasil. The late-night party starts at 11 a.m.

Hydrate’s Sunday Funday will be filled with candy for Halloween ... eye-candy, that is. Drinks specials are set and the sounds come from DJ XTASY and VJ George G. The party continues Sunday night with DJ Saint, starting at 10 p.m., and a late-night party at 4 a.m.

CircuitMOM Productions has a witches’ brew full of Halloween treats – and plenty of tricks, too. CircuitMOM and CircuitSON present CAULDRON: Witch Bitch Are You? on Saturday, October 29th at the House of Blues (329 N. Dearborn Street), with beats from Suri and Ana Paula. For tickets, click here.

And on Friday, October 28 CircuitMOM takes Over Charlies for I SCREAM, featuring DJs Ale Maes and Janky, which Maes will be playing for the second time and he’s predicting it will be “an awesome event.”

I SCREAM will be Maes’ first set in Chicago since IML this past May and his first time ever playing at Charlie’s. “I cannot wait,” he said.

Maes also will be at CAULDRON.

“These two events mean a lot to me,” Maes said.

“I have a special memory about Halloween at House Of Blues (in) 2019. My last song was such a special moment. I played ‘Wynter Gordon & Ariel - Mauro Mozart & Tony Moran.’

The energy and connection (with) everyone at that moment was something else. It was beautiful to see everybody’s connection through the music. That moment will be forever in my heart.” watch here

Maes said his DJ costume will be seen through the party-goers dancing to his beats. “I can’t wait to see the costumes; they always are amazing,” he said.

Halloween Happenings: Your guide to Halloween events in LGBTQ Chicago