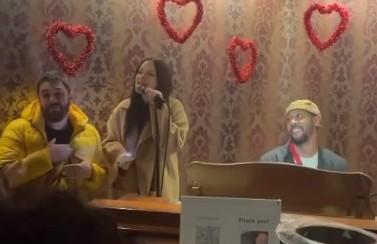 Ahead of playing her 2022 Starcrossed: Unveiled Tour on Wednesday, Jan. 26 in Philadelphia, Kacey Musgraves surprised fans with an impromptu performance at a local gay bar on Monday.

Footage posted this week on the Instagram account @gayborhoodfamous shows Musgraves singing a cover of the Fleetwood Mac hit “Dreams” to an enthusiastic crowd.

Musgraves’ Star-Crossed: Unveiled tour got underway Jan. 19 in St. Paul, Minnesota, followed on Jan. 20 with a show at the United Center in Chicago. Unfortunately there were no sightings of the star in Chicago’s LGBTQ neighborhood.

Musgraves' latest album, Star-Crossed, arrived in September 2021. Her fourth studio album to date, the project explores the art form of tragedy, inspired in part by the singer's divorce from fellow artist Ruston Kelly.

The 33-year-old singer knows her audience and continues to show support for the LGBTQ community.