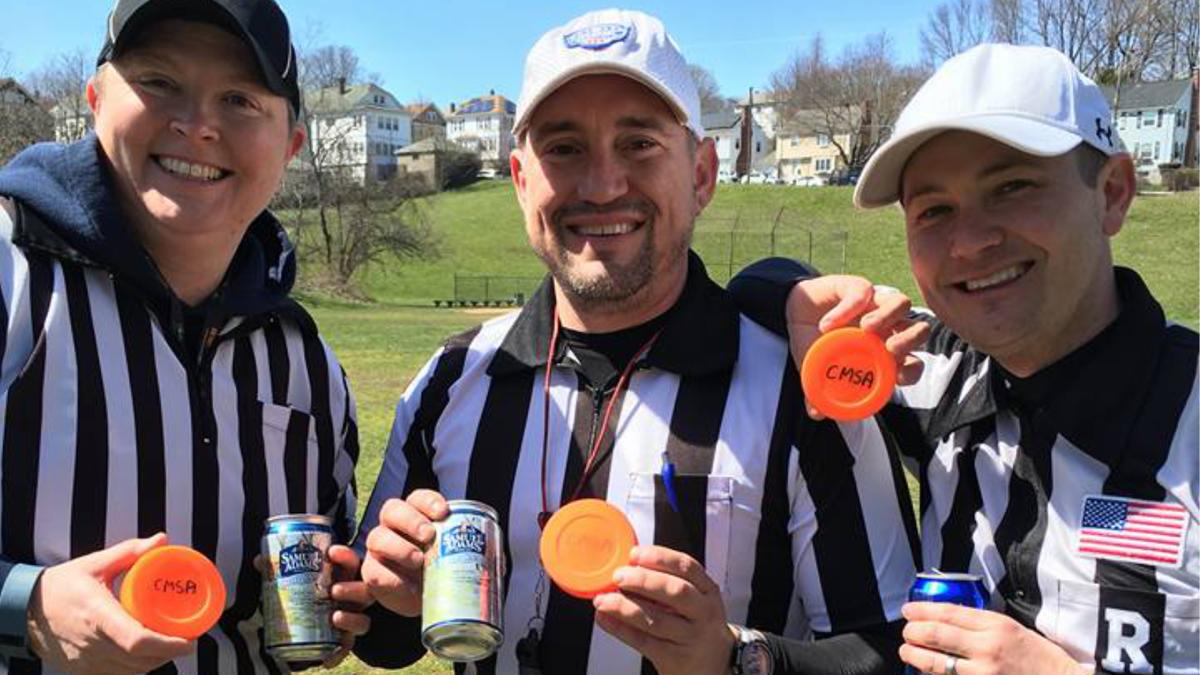 When Shawn Albritton stepped on the field to officiate at Gay Bowl X in Phoenix in 2010, he already had about 10-years of experience officiating flag football, including since 2004 for the annual

national flag football tournament that draws players and fans from across the U.S. and Canada.

Albritton was working the top-tiered A-Division quarter-final game between the New York Warriors and the Phoenix Hellraisers – and the Hellraisers certainly had a huge hometown crowd for that Saturday night game. Plus, they were filming a documentary, “F(l)ag Football: The Movie,” which featured the National Gay Flag Football League (NGFFL) in detail.

“My crew had its hands full managing all the emotions in that game,” Albritton said. “At one point, a fistfight almost broke out and I intentionally delayed play for several minutes to let everyone (calm) down. After bringing (together) both captains to discuss the situation and making a very loud announcement that ejections were coming the next time, the remainder of the game was played with great sportsmanship.

“The game came down to a dramatic last play and players, after the game, were hugging their opponents. It was the very best of the NGFFL on display.”

Players shine … and so do officials.

And now the NGFFL is honoring that official.

Albritton, it was announced yesterday, is a member of the Class of 2021 being inducted into the NGFFL Hall of Fame. He is joined by Nick Berry (Denver), Vinny Maniscalco (New York City) and Ryan Peel (Salt Lake City). They will be inducted at Gay Bowl XXI, with its 4-day event kicking off Sept. 30 in Tempe, Arizona.

“This honor reinforces my dedication and love for the sport.”

Flag football is just one of the many Chicago Metropolitan Sports Association (CMSA) sports that Albritton plays or officiates.

Albritton, 46, who lives in Andersonville and is a Director Business Planning for UI Health, joined CMSA in 2000. He has played, well, just about everything: softball, soccer, volleyball, tennis, basketball, Ultimate, golf, dodgeball and kickball.

On a usual fall weekend, Albritton officiates 8 or 9 flag football games. So, including the upcoming Gay Bowl, he probably will referee 80 games or so,

The Gay Bowl is as exciting to officiate as it is to play in, Albritton said of the high-intensity action.

He also treasures the friendships he's built over the years with his fellow officials – the referee family, as he calls it. “We are a family, staying in touch with friends nationwide and even going on non-sports vacations,” he said.

Albritton praised longtime NGFFL director of officials Lance Burage for helping his career. “I've learned so much of the game from Lance. I've never received formal training, and Lance provided that to me. More so, his friendship over the years has meant so much to me.”

Same goes for the late Bobby Nicholson, a longtime CMSA softball umpire. “Watching his presence umpiring in CMSA softball led me to want to also officiate sports. He taught me to have fun and always respect the players, while also gaining respect from others,” said Albritton, who also singled out former CMSA star quarterback Will Ward: “He pushed me to join Gay Bowl and also pushed me to be commissioner for CMSA back in 2003.”

Said Burage: “Shawn has been a trusted NGFFL official for well over a decade. He treats every play of every game as important, whether it is a championship or a consolation game. The level of respect he has across the country makes his induction something truly special.”

Added Andrew Burke, a former CMSA teammate of Albritton: "I always knew when I was part of the Chicago flag football league that Shawn was a dedicated and knowledgeable official. When I relocated to Boston, I learned how much respect he has throughout the NGFFL. He is synonymous with Chicago and highly deserving of this honor.”

Albritton certainly has come a long way since his first Gay Bowl officiating role, in Atlanta in 2004, when he wore a cheap striped shirt purchased at Sports Authority with white sneakers and no hat.

“Through several leadership transitions in flag football, Shawn has consistently remained present to our local leagues. He is committed to fair play and safety for all our players. We are proud of Shawn for his efforts being recognized nationally," said Derek Wooten, commissioner of the CMSA flag football league.

“Those who have had the pleasure of having Shawn assigned to their games know that he will bring a calming presence to the proceedings. He truly understands the artistry of officiating,” said Matt Herek, CMSA president emeritus. “He knows his role is first, to keep players safe, second, to ensure fair play, and finally, to apply the highly technical aspects of the rules when necessary.

“Beyond his Gay Bowl involvement, Shawn has served as commissioner, associate commissioner, and director of officiating for CMSA's flag football League. He is the definition of a committed and involved volunteer.”

Albritton also has officiated the Chicago Women's Flag Football League. “By doing this, he has built the types of relationships that ensure inclusivity both locally and nationally,” Herek said. “It can be challenging to assess the impact of an official when judging their worthiness for the Hall Of Fame. There are no statistics to review. Shawn's impact goes beyond wins and losses, touchdowns scored. He has been a role model for veteran and rookie officials.

“Most importantly, he is a proud ambassador for inclusive flag football.”