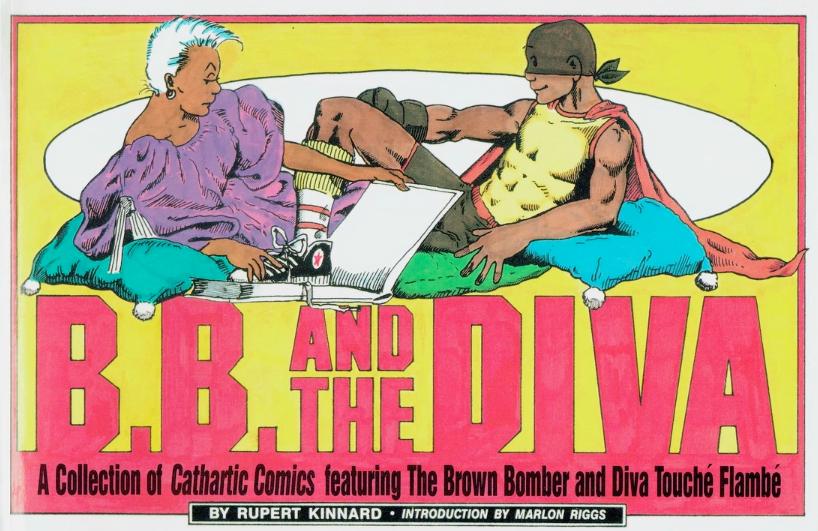 No Straight Lines: The Rise of Queer Comics tells the story of five pioneering cartoonists, including one with deep ties to Chicago, as they go from being featured in gay newspapers and bookstores to worldwide fame, depicting everything from the AIDS crisis to coming-out, from same-sex marriage to themes of race, gender, and disability. Their work is funny, smart, and profound – and truly provides a unique, uncensored window into LGBTQ lives from the 1970s onward, beginning at a time in which there was no other genuine queer storytelling in popular culture.

Rupert Kinnard, born in Chicago in 1954, attended high school in the city and then graduated from the American Academy of Art. He is credited as Prof. I.B. Gittendown, who is the openly gay African-American cartoonist who created the first Black queer comic book characters: the Brown Bomber (a teenage superhero) and Diva Touché Flambé (his ageless lesbian partner). Both were published in the now-defunct Outlines magazine.

Kinnard shines in the spotlight of Reeling: The Chicago LGBTQ International Film Festival. No Straight Lines will be shown on Saturday, Sept. 25, starting at 5:15 p.m., at the Landmark Century Centre Cinema.

“His story is so poignant,” said film director Vivian Kleiman.

The tales of all five are equally engaging as are their personal journeys, as they, against all odds, helped build a queer comics underground that has been able to grow and evolve in remarkable ways.

No Straight Lines had its world premiere at the Tribeca Film Festival, one of the most prestigious festivals in the world. The film has been screened at film festivals across the U.S., in Europe, and in Asia. No Straight Lines has screenings in Canada and Italy before landing in Chicago, then Ireland and Norway after Reeling.

“It's an exciting time, an exciting event (being screened). I'm delighted that the film is being released,” said Kleiman, who admitted that she was hunkered down at her desk during the pandemic, working hard on the editing of the film.”

Despite the pandemic woes around the world, Kleiman was able to be “very productive” on the film.

No Straight Lines profiles the work of Alison Bechdel, which includes Fun Home, her graphic memoir about her closeted father; Howard Cruse, who created the graphic novel about growing up gay in Civil Rights era Alabama; Jen Camper, who created dyke characters; and Mary Wings, who created the first lesbian comic book in the basement of a women's karate cooperative.

No Straight Lines “incorporated the voices of a younger generation of queer artists to try to make the film more meaningful for a younger audience,” Kleiman said. “I would have expected a younger artist to not be so interested in the work or prior generations, but to my surprise, I heard how much they appreciate the work of the queer artists of the past and how much they wish they had known about their work earlier and how much they wish they knew more about them; it's quite surprising and it speaks to our queer community that has been so lacking of representations of our own lives.”

Kleiman said selecting the five artists was not easy, by any stretch.

“Story-telling in a documentary should be as good of an experience as an engaging novel,” she said. “Documentaries often focus on one person, or three people. But I just couldn't select three. There were just too many great stories, great people. Even bringing it down to five was a bit of a challenge.”

Kleiman said some of her favorite moments from the film involve Kinnard talking about getting countless get-well cards from his colleagues and fans. “It really showed this sense of community and diversity in the artistic style. It really is the epitome of what the film stands for,” she said.