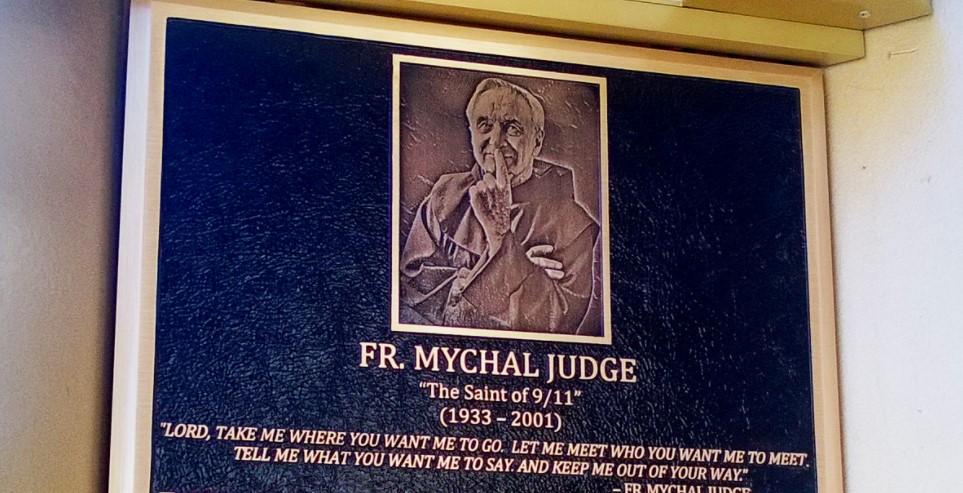 His body bag was labeled, Victim 0001

The image of soot-covered firefighters, an EMT, a police officer, and an Army veteran, carrying the body of a Catholic priest on a makeshift litter became one of the most revered photographs of the September 11, 2001 attack on New York City. The photo has been called "American Pieta," recalling the Renaissance sculpture by Michelangelo of the Virgin Mary with her son's lifeless body upon her lap.

Rev. Mychal Judge, OFM, was the openly gay Franciscan priest who was pulled out of the rubble that day. The chaplain, beloved by New York City's first responders, was the first official recorded death of the infamous day. His body bag was labeled, "Victim 0001."

The Brooklyn-native was the chaplain of the Fire Department of New York (FDNY) and as such, Father Mychal rushed to the scene after the first plane struck. He began his work offering last rites and blessing bodies already on the ground.

He was called into the World Trade Center North Tower, where the Office of Emergency Management (OEM) had set up a command post.

But after the second plane hit the North Tower, the South Tower began its horrific collapse. Debris flew into the lobby where Father Mychal was helping strategize. He was struck in the head.

According to the people that witnessed the strike, Father Mychal yelled out a prayer in the fiercest voice as if compelling God right there and then, "End this right now! God, please end this!"

Those were his last words.

We know the names of the people who lovingly placed Father Mychal's body upon an office reception chair to carry him out of the rubble. They were NYPD Lt. William Cosgrove, who discovered the body, FDNY firefighters Christian Waugh and Zachary Vause, and FDNY EMT Kevin Allen. And there was a civilian in a bright blue dress shirt, retired U.S. Army Maj. John Maguire.

As they stepped out from the dust clouds, Reuters photographer Shannon Stapleton captured one of the most compelling images of the national tragedy.

Father Mychal's body was laid out in front of the altar at St. Peter's Catholic Church before he became the first victim to be brought to the medical examiner.

Because he was the first to reach the medical examiner, the 68-year old Franciscan was certified on papers as "Victim 0001."

While he didn't overtly present himself as gay, he shared his identity with others like his superior, FDNY Commissioner Thomas Von Essen.

In a New York magazine article Von Essen said, "I actually knew about his homosexuality when I was in the Uniformed Firefighters Association."

"He and I often laughed about it, because we knew how difficult it would have been for the other firemen to accept it as easily as I had," he continued. "I just thought he was a phenomenal, warm, sincere man, and the fact that he was gay just had nothing to do with anything."

Father Mychal was a member of a Catholic LGBTQ organization called Dignity. It has a presence here in Chicago. They explained to GoPride.com that they work to enact change within the Roman Catholic Church to welcome and accept LGBTQ persons, allow women into the priesthood, among other reforms.

When the conservative New York archbishop, Cardinal John O'Connor, banned Diginity from meeting in his churches, Father Mychal invited Dignity to use the Franciscan church. The religious order, and its church, was outside the control of the archbishop.

Biographer Michael Ford said that Father Mychal often asked, "Is there so much love in the world that we can afford to discriminate against any kind of love?"

According to The New York Times, it was revealed in personal diaries that Father Mychal had a deep loving relationship with Al Alvarado, a Filipino nurse. Though, they didn't see much of each other because of the way firefighters' work hours are structured.

Obviously, the relationship could not be open. It would have been forbidden by the Church.

Father Mychal, like many Franciscan friars and laypersons, was deeply involved in civil rights activism. He was seen a lot serving the homeless and hungry of the city. He visited hospitals to tend to the sick and dying. He helped immigrants, many of whom were undocumented, that he met through parish assignments.

As a recovering alcoholic himself, Father Mychal advocated for the work of Alcoholics Anonymous.

In the film, Saint of 9/11, Father Mychal is seen anointing a person struggling with AIDS. The man asked him, "Do you think God hates me?" The priest embraced the man and rocked him like a loving father caring for his sick child.

Father Mychal never waivered to be seen ministering to the LGBTQ community. He wasn't on the sidelines. He was in it. He marched with them in the Pride parades and counseled people in the open air.

Many devout Catholics, especially among members of FDNY and NYPD, petitioned then-Pope John Paul II, Pope Benedict XVI, and now Pope Francis, to consider Father Mychal for sainthood. But his homosexuality and advocacy for LGBTQ rights have stymied such efforts.

But there are also conservative Catholics who refuse to believe that Father Mychal was even gay. Articles and radio pundits have argued that the LGBTQ community is desperate to make of themselves a gay icon and hero, and have made up a romantic idea of Father Mychal as homosexual to progress their agenda.

There are many memorials to Father Mychal. A street in New York City is named for him. There's New York Harbor boat with his name.

Here in Chicago, you will find him memorialized in the neighborhood popularly known as Boystown. He has his own plaque along the Legacy Walk on N. Halsted St.