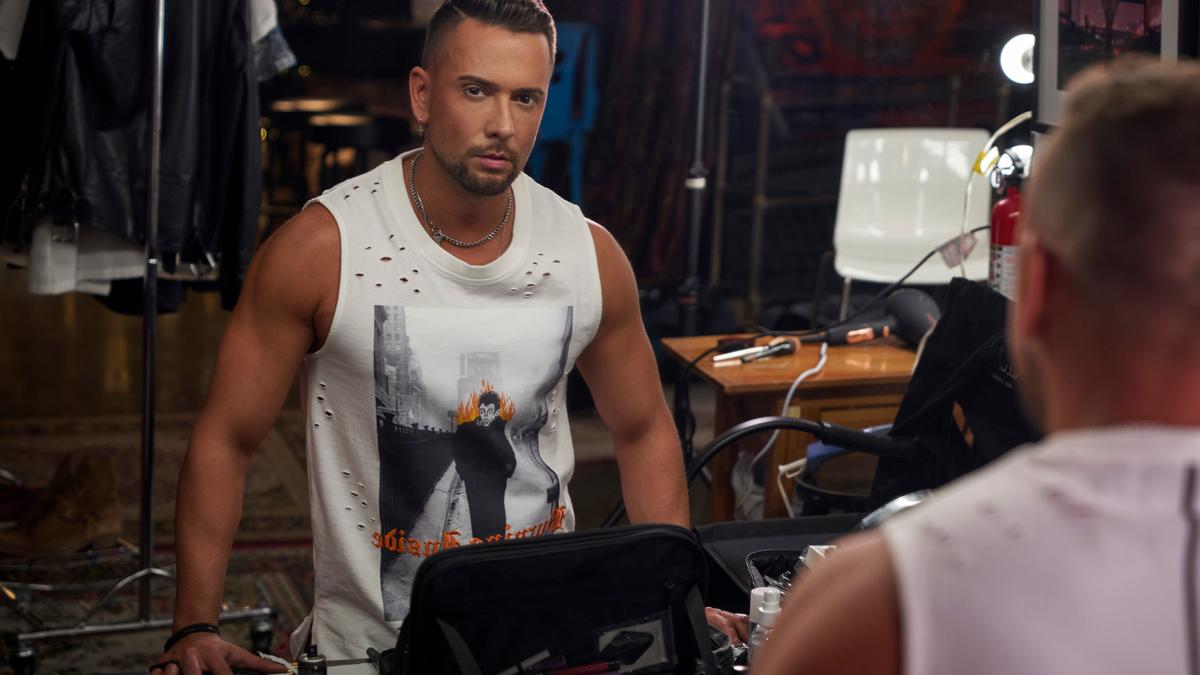 ‘Before ‘shaming’ was even a thing, I was the poster child for it in 2008,’ says Hernandez about his time on ‘American Idol’

David Hernandez is heading to Las Vegas for a three-month musical residency, starting September 15 – and he’s leaving his clothes at home.

“I’m excited and grateful to be part of such an incredible cast,” Hernandez said. “Of course there’s always a little bit of nervousness before any endeavor. Then you throw in being completely naked …

“This is a first for me in terms of singing and acting while naked. But I’m stoked to be out of my comfort zone and to be back in theater where it all started for me as a kid.

“I’ve known Chris Salvatore for years, but we’ve never gotten a chance to hang so this will be a nice opportunity to get to know each other. I met Marcus at good friend’s birthday party earlier this year. Who knew we would’ve been doing this show in our birthday suits months later?

“I’m looking forward to meeting the rest of the cast when I get to Vegas.”

Hernandez, ironically, was at the forefront of an Idol firestorm during his stint of the popular show when it was revealed that he worked as a nude male stripper at a gay strip club, called Dick’s Cabaret, in Phoenix, Arizona.

He ultimately was the 12th place finalist on FOX's seventh season in early-2008, which David Cook ultimately won.

“Before ‘shaming’ was even a thing, I was the poster child for it in 2008,” Hernandez said. “I was shamed by all media outlets, employers, some family, some friends and the world. I didn’t really understand why it was such a big deal that I was formally a stripper. I think that information mixed with my sexuality just didn’t sit well with Middle America and what they had in mind for their next American Idol. (That’s what) was hard.

“Up until a few years ago, people were still calling me that stripper guy. And funny enough, if that were to happen today, it would probably catapult me to fame. It was just a different time and different climate. I really don’t hold any more animosity for the people (who) sold me out or outed me before I decided it was time. If they counted me out, they can count me back in. I have grace for a changed mind.”

Hernandez now joins a box office hit for 20 years on off-Broadway, with its cast of five hunky “boys” singing for 60 minutes, with hilarious comedic timing … and no clothing.

Naked Boys Singing! premiered in Los Angeles and went on to play in theatres around the world and though the musical was initially marketed to gay men, its fan base grew to a wide and diverse audience.  It opened in New York City in 2000 and the film adaptation was released in 2007.

Performances with Hernandez and the others will be Wednesdays at 9 p.m., Thursdays through Sundays at 10 p.m. Tickets start at $74.99 with a limited number of premium VIP tickets available.  (For tickets, go to: NakedBoysSingingVegas.com.)

Hernandez can’t wait for night one.

“After a year and a half of being locked in the house, I’m stoked to have a change of scenery,” he said. “Headlining in Las Vegas is something that most artists dream of. I’ve done many shows in Las Vegas, but never had a residency, so I’m very excited. Three months isn’t a very long time; I know it’s going to fly by. But who knows, if the show goes as planned, we may be there longer.

“It’s amazing for any show to run (20 years).  It means that (the show) resonates with people and there’s a lot of interest. I’m excited to bring what I have to the table and see how the show grows with this new cast. I have mad respect for the writers and the former cast (members) who came before me. A couple of people have already reached out to me from previous casts and wished me well on this run, so it’s very much like a family.”

The openly gay – and dating – Hernandez has no issues performing au naturel. Nor does Derek, his boyfriend of 4 years, who works for a digital media company and serves as Hernandez’s day-to-day manager.

“Being naked is really only taboo because societal norms make it so,” Hernandez said. “If we’re all being honest, we love nudity and we are sexual beings. Ironically, the show isn’t sexual as much as it is about empowerment and owning your body, mixed with musical comedy.

“Expand on that: well, I think there’s a certain amount of confidence you have to have to date an entertainer. (My schedule and Derek’s) schedules are crazy, and so are our minds at times … you just have to trust your partner.”

Hernandez learned of the Naked opportunity from longtime friend, Jai Rodriguez, after the producers reached out to the former Queer Eye for the Straight Guy heartthrob.

“He was the one who got me the gig,” Hernandez said.

“I was pretty much all in (from the start). I feel like, in some ways, I really manifested this opportunity. Like I said, I’ve been wanting to get back into theater for a very long time. And, coincidentally, I’ve been working on my body super hard during the pandemic and becoming more and more comfortable with who I am. I didn’t really flinch when they said it’s a fully nude show. It’s my body. I feel sexy and fit. It is what it is. If Cardi B. can scissor Megan the Stallion and talk about her WAP, I can sing and let my junk hang out. Booked and blessed is what I like to say.”

Hernandez has two trainers in Los Angeles, helping sculpt his body for the everything-will-be-scene role. He will join Fit Club in Las Vegas and hire a trainer there, too.

“There is humility when you are singing naked in front of an audience,” Hernandez said. “You kind of have to just accept and appreciate your body for what it is in that moment and trust that you’ve worked hard and done what was necessary before you stepped on the stage. I think there is a beauty in being vulnerable like that.”

Hernandez said he is “stoked” to move to Vegas, particularly for the only new show on the fable Strip, so far.

“There is a strong entertainment community in Las Vegas, and I really want to tap into that because I’m looking forward to doing my own cabaret show at some point,” he said. “I definitely want to explore the city outside of The Strip. We’ve all been to Las Vegas Boulevard. But I want to hike and experience nature.

Who Would You Really Like To See In Concert: Brandy

People Might Be Surprised To Know: “I’m an introvert.”

The Perfect Date: “Home with takeout, under the covers with our dog. Simple. Sleep seems to be the priority these days.”

The Pandemic: “The beginning was really tough. I was really depressed because I lost all my work. But then I channeled that into my Livestreams. I did more than 60 Livestreams during the pandemic with special guests and friends from my living room, then eventually we moved to the Montrose Hotel. I showed up every week for my Facebook friends and fans and in return, they showed up for me. I was able to keep my head above water financially while still having an outlet for my singing and music.”

It’s A Fact: “I’m currently working on my full-length album, which is due out next spring, and other music videos also are in the works. I also want to dive heavily back into acting.”

One Thing I Would Change: “My internal dialogue.”