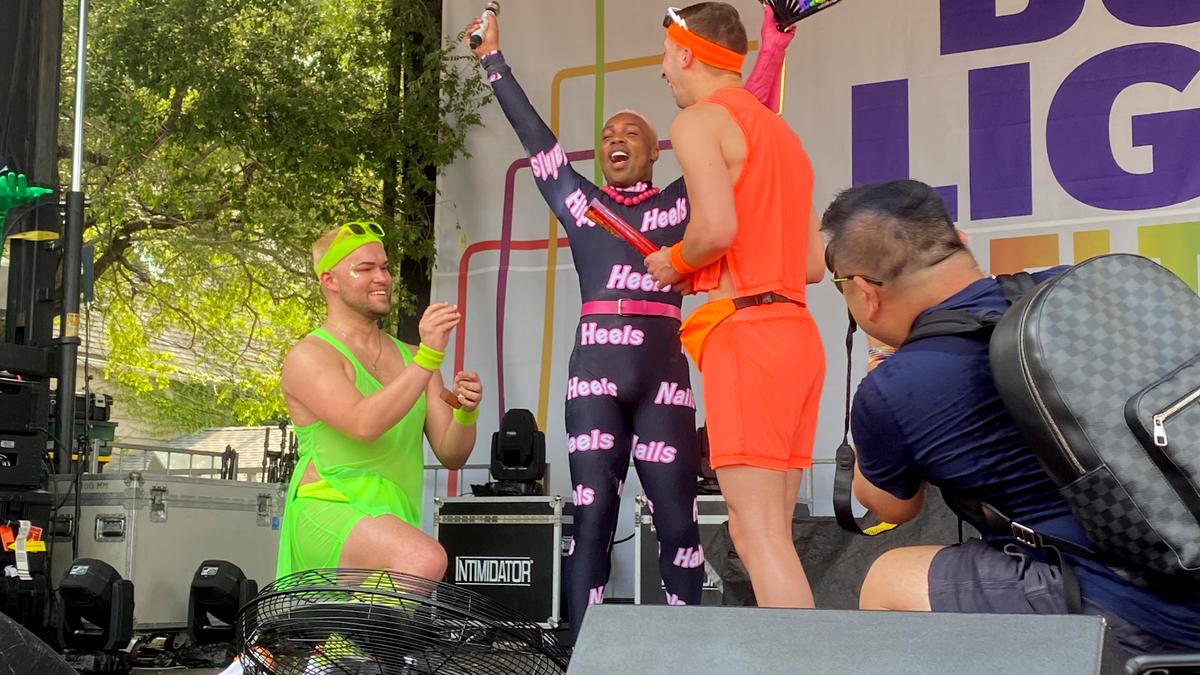 ‘Todrick asked me if I had anything to ask Brad, and then I got on one knee,’ explains Ryan Goszkowicz

With a little help from a renowned friend, in front of thousands of cheering strangers, Ryan Goszkowicz got down on a knee and popped the question to his boyfriend of 2-plus years Sunday, August 8, on-stage at Northalsted Market Days.

Brad Zinda said, YES, and the two 25-year-old Wisconsin residents, as they later proclaimed on social media, were enGAYged.

The marriage proposal came at the end of Todrick Hall's performance on the Bud Light Stage – with help from Hall.

“I had been in contact with Todrick for a while planning it,” said Goszkowicz, who had to meet with the stage manager to make sure everything ran smoothly – and then act surprised when the entertainer invited them on-stage.

“Todrick asked me if I had anything to ask Brad, and then I got on one knee.”

Cheers, tears, hugs and emotions on a steamy Sunday in Chicago's Lakeview neighborhood.

“I worked for (Hall) in the past, so I asked him to help with the proposal,” Goszkowicz said. “(Sunday), I realized that (the proposal) actually got around to the organizers a bit, so, when the time came, we had multiple cameras going off. It made the entire thing so special, and to share it with an entire audience full of the LGBTQ community … I just can't explain the overwhelming support that we felt on that stage. The rest of the day was spent having people come up to us and congratulate us. We felt so special.”

Goszkowicz and Zinda now live in Stevens Point and are moving to Madison in about a month. Goszkowicz then will be the manager at a makeup store and enjoys performance, singing, dancing and more. Zinda will be working at a wild bird store and enjoys bird surveying and conservation.

“We love going on adventures and being our open gay selves, so it just felt like the right place,” to ask Zinda to marry him, Goszkowicz said. “I have a huge amount of respect and admiration for Todrick. He really opened the world of possibilities to me and helped me be a more confident gay man. I owe a lot of who I am to that man and I'm so glad that he was so gracious in helping me out. I'm a Toddler for life.

“I was anxious all week, but also excited to go to Market Days. But right before (the proposal), I couldn't tell if it was dehydration, slight intoxication, excitement, anxiety, or a combination of all … I was shaking the entire concert.”

And then there were the nerves driving to Chicago.

You see, they packed light en route to Chicago, so Goszkowicz hid the ring in the car's glove compartment “because I didn't think he would look in there,” he said.

Sure enough, two minutes into the drive Zinda asked if Goszkowicz had his new registration paper – and he started to open the glove box.

Goszkowicz slammed it shut from the driver's seat and assured Zinda that he had it.

Eventually the ring was given to a friend for save keeping before the proposal.

“I couldn't have asked for a better scenario. In retrospect, the only thing I would change would have been to share with Brad in front of everyone how much he means to me, but I was nervous enough as it was. I even stumbled over, 'Will you marry me?'” Goszkowicz said.

“Brad has brought something into my life that I will never be able to repay him for. I have never met someone so patient and kind. I can tell that he lives to be my one-man cheerleader. I am so lucky to have found a forever that came to me when I needed it the most.

“I'm so happy that he wanted to be mine, as much as I want to be his. There's no better feeling.”

Goszkowicz and Zinda met on Grindr and joke that they wouldn't be opposed to the gay dating app sponsoring their wedding. Neither was looking for a relationship in the spring of 2019, especially Goszkowicz who “was in a rough point in my life,” he said. Plus, Zinda wasn't out at the time.

“My dad had passed away a little while before I met Brad, so I was still recovering from that. But after meeting Brad, things changed. He came out; we started dating, moved in with each other, and here we are!”

“I really wanted to meet him, but I was busy getting ready for this drag pageant I was (participating) in, so on a weekend we decided to go get some coffee,” said Goszkowicz, who hadn't mentioned to Zinda that he did drag.

As their date continued, Goszkowicz had to go for a gown fitting. In fact, he was a bit late. But he didn't want the date to end.

So Goszkowicz asked Zinda if he wanted to come to the fitting. Zinda agreed.

They are planning to get married in October 2023 – no Friday the 13th, particularly since Goszkowicz is obsessed with the fall and Halloween.

“This (past) weekend, I was expecting to come down to Chicago and experience Market Days for the first time with my boyfriend and a friend of ours,” Zinda said. “Our weekend was off to a great start when we got to see some amazing and famous drag queens in one of the drag shows on Friday. My day was made on Saturday when I got to meet and hug one of my favorite YouTubers who was, and still is, an inspiration to me. We arrived about an hour early on Sunday for Todrick Hall's performance because not only did I want to see Todrick for the first time, but I wanted to see him from the front row. We were successful in securing ourselves spots front and center; I was thrilled. My day was made then, but what was to happen to me at the end of Todrick's performance not only made my day … it made my whole life! I couldn't have thought my weekend would get any better until my man got down on one knee and asked me to marry him up on stage, with Todrick next to us, in front of thousands of people. I was completely blown away.

“I was 100 percent completely surprised (by the proposal). I'm normally one who likes to be aware of things and tends to be pretty good at figuring things out, but I had absolutely no clue that this was going to happen.”

Goszkowicz told Zinda for weeks before Market Days that they might get to say “Hi” to Hall. Zinda had no clue Hall was in on the proposal.

“I am completely blown away,” Zinda said. “In middle school, I was a very shy and depressed, with basically no friends. I was an easy target for other classmates to pick on and was often called gay. Of course, I was very closeted then and when others called me gay it did not make me feel good. When I finally came out just a few years ago after meeting Ryan, I finally felt supported, accepted, and loved. I never would have thought back then that I would get proposed to in front of thousands of people by a man who I love.

“I want this special moment that I had getting proposed to amongst thousands of LGBTQ people (to) serve as a message to all the young children who are gay and being bullied in school, to know that even though it seems like that is how the rest of your life is going to be and you won't be able to love who you want to love, there is hope. There are millions of us out there who support you.”