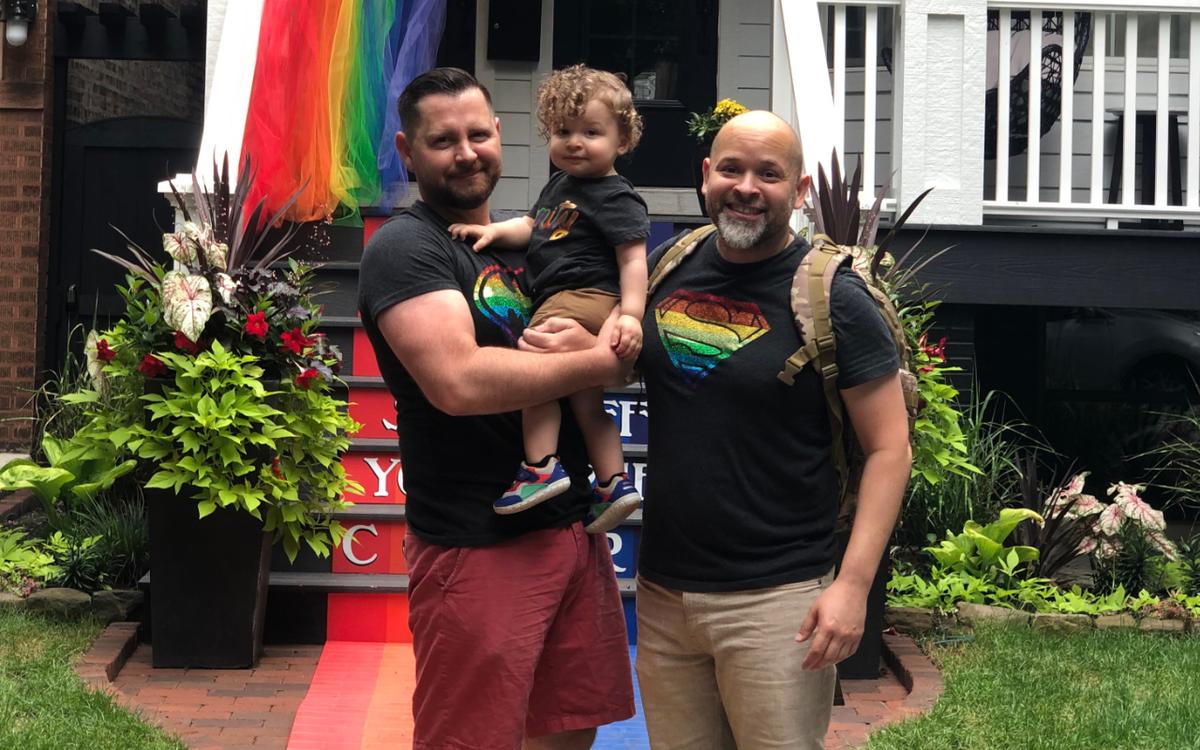 jesse campbell and nicholas vazquez in front of their home

The most famous paintbrush and the rainbow stripe it appears to paint at the Andersonville home of Nicholas Vazquez and his partner of eight years, Jesse Campbell, took them about 20 to 30 hours to build and it cost them about $450.

They were just looking to do something different because others in their neighborhood had hung their Pride flags for June. But they didn't have a rainbow flag.

They did, though, have an idea, and with Campbell being an interior designer, his concept came to life – around the world, some would say.

Campbell got Styrofoam from Home Depot, carved out a paint brush from that. Vazquez painted the wood paneling, which made up the walkway. Campbell added the hanging fabric.

Their home was ready to be painted, sort of, by the Pride colors as of June 10th, but they didn't share images of their home on social media for several days as they were expecting visitors that weekend and wanted to surprise them.

In fact, they keep a list of countries where their oversized rainbow painted home has been shared from. That list is now more than 50, including France, Italy, Belgium, Spain, Colombia, Hong Kong, Cuba, Ireland, Honduras, Bangladesh, Turkey, Venezuela, England, the United Arab Emirates, The Netherland, the Philippines, and beyond.

“It totally blindsided us as far as what everyone has thought of it,” said Campbell, 41, originally from Cleveland. He has lived in Chicago since 2008.

Vazquez, 45, is a business operations manager, and was born and raised in Chicago's Logan Square neighborhood.

“It's the way I pictured it (would look), but we never pictured as many people liking it as they have. So, I guess it turned out better than expected,” Campbell said.

Their home has turned into a local tourist destination, with strangers stopping by – literally at all hours, they said – to take photos, regardless of the weather. Even Chicago mayor Lori Lightfoot visited, along with her wife Amy Eshleman. Other politicians snapped photos at their home, too.

With the photos, visitors also have donated, as the couple asked visitors to donate via a QR Code to The Trevor Project, the only nationwide, around-the-clock crisis and suicide prevention helpline for LGBTQ youth in the U.S. They have raised more than $17,000 in about two weeks.

“This has been a humbling experience, giving back to the community in a way I never thought I could,” Campbell said. “The funds raised … that's priceless.

“The important thing is, it means something to everyone.”

Vazquez, for instance, heard parents telling their children what the pride colors mean, and more.

“It's been educational for younger generations, which is awesome,” Campbell said.

The paintbrush and rainbow colors will come down on July 1st as they then will prepare for a Halloween theme. But rest assured, they will do something as dramatic for Pride Month 2022 – and they will be prepared, unveiling the new look on June 1, 2022.

And their 2022 project will be even more inclusive, Campbell said.

Vazquez said that a member of the mayor's staff visited in advance to alert them that they Mayor would be visiting on July 26th.

“It was amazing,” to meet them, Vazquez said. “She was very genuine and had such great energy and vibe.

“It really feels great that we did something great, powerful and meaningful to a lot of people.”

Vazquez said one of his lasting memories from this Pride Month was “how safe people feel that they live near us, visiting the house and taking a picture (there), and also how others wish they lived in Chicago in such a safe environment,” he said. “That really blew our minds.”