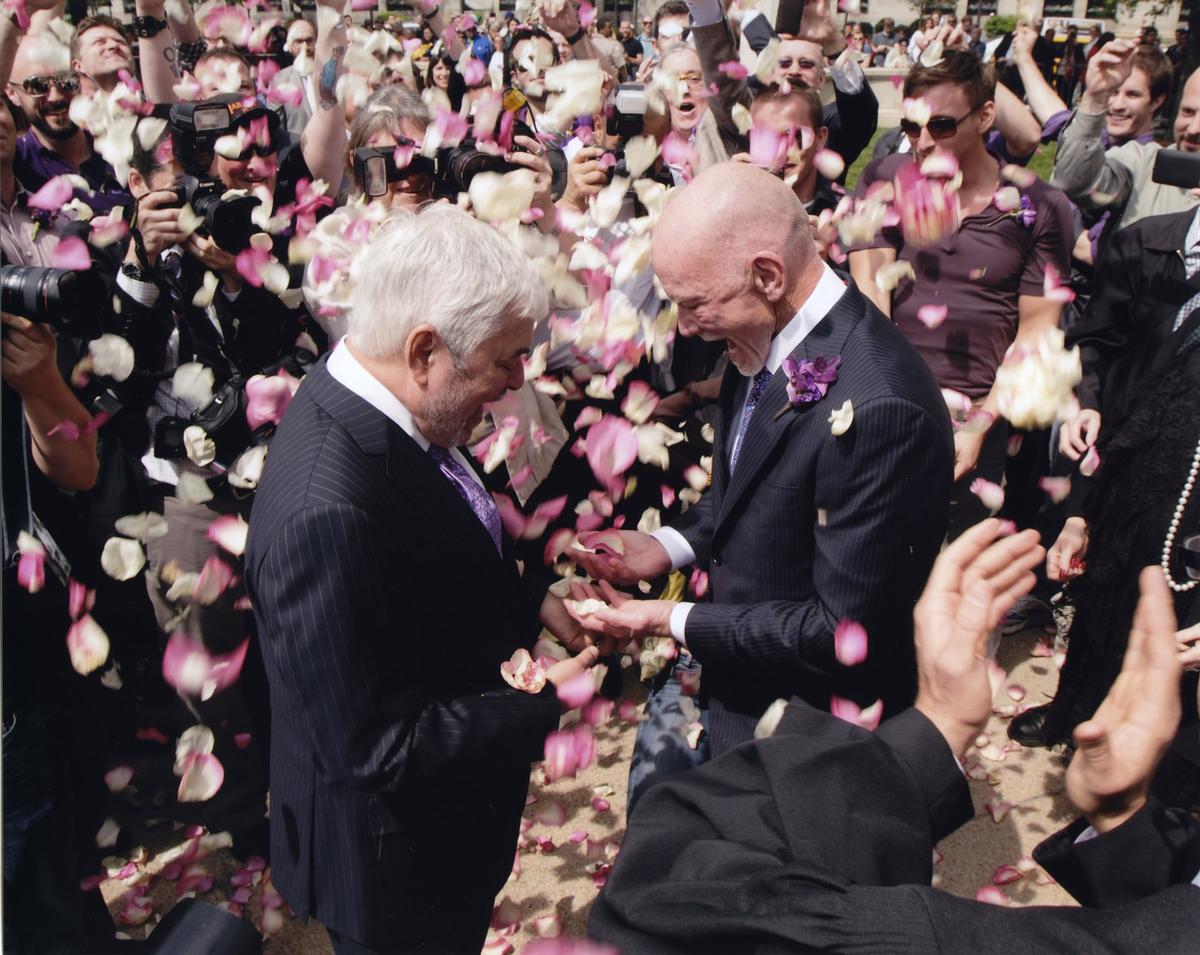 'ART AND PEP is the love story behind the long battle to love – and live – freely,' says director Mercedes Kane

Art Johnston was doing a two-year theatre program at Northwestern University when some guys in the theatre department told him that about bars in Chicago “for people like us.” Johnston soon thereafter walked into a gay bar in 1973 named Shari’s, where a bartender that night was named Pepe.

“Pep came home with me and has never left,” Johnston said with a smile.

“There was just something about him,” said Peña who, ironically, was breaking up with a guy at the time named Arthur.”

This Arthur stayed in Peña’s life.

“Our first full day together, my electricity was cut off for non-payment. Pep immediately took me to a payment center and paid my bill,” Johnston said. “I can truthfully say, from our first date, Pep has been bringing light into my life.”

Fast-forward almost 50 years. Johnston and Peña are still together, truly one of the brightest lights in the LGBT community in Chicago, and beyond. Across the U.S., and into Peña’s native Cuba.

They are the co-owners of Chicago’s Sidetrack, one of the most recognized LGBT hubs in America, a bar that shines with its slushies and soars through the leadership of its longtime owners.

Now the world will toast these two Chicago icons. ART AND PEP is a feature-length documentary film that spotlights the life and love of these LGBTQ+ civil rights leaders who, for more than 40 years, have been a driving force behind LGBTQ+ equality in Chicago and beyond, with Sidetrack fueling movements and creating community in Chicago’s northside queer enclave.

The 90-minute film, slated to be released in 2022, tells the inspiring story of their long struggle for equality and their fight for everyone to love freely.

Kevin Hauswirth, who first met Johnston in 2006, casually shared the story of Johnston and Peña’s love and life of activism with Mercedes Kane.

It ultimately was Kane’s idea to make the film.

“Kevin warned me that Art and Pep would take some convincing to put their lives in the center of a film,” Kane said. “To say that they were reluctant subjects would be an understatement. Making a film like this is deeply personal, and it’s not easy nor comfortable to put your lives, your work and your love on display”

But Art and Pep agreed, leading to ART AND PEP.

“The LGBTQ community is able to live openly and display their love and commitment because of the queer pioneers who risked everything for equality,” said Hauswirth, the executive producer of ART AND PEP. “Art and Pep’s story is more than their bar, or their battles to advance our rights. Their story is our community’s living history.

“ART AND PEP will let families across the country see this gay love story as a great American love story, to see how far LGBTQ people had to come to simply be recognized, and how much further we still must go.”

Kane added, “ART AND PEP exemplifies the power of love. Because Art fell in love with Pep, he stayed in Chicago and they eventually opened Sidetrack, a space that allowed them to extend that love to the community. Their love kept them alive, fighting for human rights and building the political clout needed to win. It was love that got them started and love that’s kept them going for over 45 years. As a director, it’s a dream to tell a love story of this magnitude with the potential to impact and inspire so many.”

After more than a year of production, principal photography was recently completed, and filmmakers are moving into post-production. Production began in November 2019 and most of the shooting wrapped in January of 2021. The near-140 hours of footage captured shows Sidetrack before the pandemic, during the pandemic, Art and Pep’s life over the past year, as well as more than 35 interviews with family, Sidetrack employees, activists, advocates, politicians, and others.  The filmmakers also secured many archival photos and videos, news archival footage, etc., which will bring to life the historical aspects of the story.

The film also will weave in the modern-day work of the new generation of Chicago’s LGBTQ+ leaders and activists, such as: Brian C. Johnson, CEO of Equality Illinois; Brad Balof, general manager of Sidetrack; Channyn Lynne Parker, community advocate for transgender people and executive at Howard Brown Health; Anna DeShawn, from the board of Affinity and founder an LGBTQ radio station; Sen. Mike Simmons, the first openly LGBTQ Illinois state senator; and others.

“Stories around queer rights and AIDS often focus on the coasts, ignoring Chicago’s role in (these movements),” Hauswirth said. “This film intends to help fix that, by focusing on a love story that survived, and fueled, it all. We’ll tell the story of the Midwest’s role in shaping equality.”

Kane added: “ART AND PEP is the love story behind the long battle to love – and live – freely. Viewers will come away from the film understanding the depth and importance of the battle for basic rights and equality, the joy and pain experienced by the LGBTQ+ community and why it was all worth it.”

A teaser is available at www.artandpep.org, where filmmakers have a crowdfunding and crowd-sourcing campaign to gather archival footage and make financial contributions to support editing and distribution. To date, filming has been made possible by the support of individual donors, a media sponsorship from Canon, a generous contribution from the Pride Candle Company (pridecandle.com), and partnership from Gerber/Hart Library and Archives, The Center on Halsted, Howard Brown Health, The Legacy Project, WGN-TV, and Windy City Times.

“This story is truly a living history. The filmmakers have been able to capture these stories directly from those who lived through tragedy and fought to make change. It was also shot during a pandemic at a unique time for Sidetrack and many other small businesses and communities,” Hauswirth said.

Johnston, 77, said his favorite part of the film was filming with Peña’s family.

“We don’t really make a fuss about our relationship or our lives, so hearing them open up and answer questions that we would never think to ask was an emotional experience. Hearing them speak with such love for Pep and me was something I’ll never forget,” Johnston said.

Peña said the project “really brought us closer,” he said. “After almost 50 years with Art, whoever thought we’d learn more about each other. Going through old photos and sharing memories was a ray of light, especially during such a dark year,” as it was in 2020.

Johnston still recalls conversations, years and decades ago, with local reporters. The Chicago Tribune or Sun-Times would call, wanting to do stories about this new unique queer bar. Johnston always said, No Thanks.

The reporters were shocked, baffled why Johnston would not want free publicity for Sidetrack.

“I knew what they wanted. I knew how people felt about us, about our community. They wanted a sideshow, to come look at all the queers and leave. We weren’t going to give them that,” he said.

Johnston’s memory bank also includes the time in the 1980s when a Sidetrack customer had to be kicked out for causing trouble. Outside of the bar there was a cop asking what was going on, so Johnston explained. “He looked at me and said, ‘Aren’t you that faggot who runs that faggot bar? We’ve got too many of you around here,’” Johnston said. “I remember spending the night in jail. The police station we’d get locked up in is now LGBTQ senior housing. That’s progress.”

Peña also recalls the night Barack Obama was elected President.  Peña looked at the crowd inside Sidetrack and saw a man crying, talking on his phone. “I could hear him say, ‘We have a Black president.’  I’ll never forget that moment or the significance of that night,” Peña said.

Peña, also 77, said their goal at Sidetrack was to provide a safe space, where everyone could feel welcome. “I see this new generation of queers so open, so free, so unapologetic. That’s what we’ve fought so long for; I hope Sidetrack will keep doing the work to make a space for everyone to feel free,” he said.

Sidetrack has endured, especially in its early years. One day, for instance, they arrived at Sidetrack and somebody had spray painted FAG BAR on the door outside. “Art ran to go grab scrub brushes to clean it, and I just remember turning to him and saying, ‘Leave it. It’s true,’” Peña said.

Sidetrack, when it first opened, did not have a sign outside – on purpose. The first sign they ever put up was a piece of plywood that Johnston found. They painted the words “SOON” on it and hung it near the door. “We just didn’t have the money for a sign,” he said.

“The first time I was arrested in a bar raid, I met this fabulous drag queen in my cell. She told me to use my one phone call to order food (because) we’re going to be in here while. So, I did, and we ate burgers until they let us out in the morning,” Peña said.

Peña also recalls the time, just a few years ago, when Chicago Mayor Lori Lightfoot visited Sidetrack for Showtunes – and she came into the DJ booth as a guest veejay, leading the bar in an Okla-homo sing-along, he said.

For more information on the ART AND PEP documentary, go to artandpep.org or, Facebook.com/artandpep or on Instagram @artandpep.