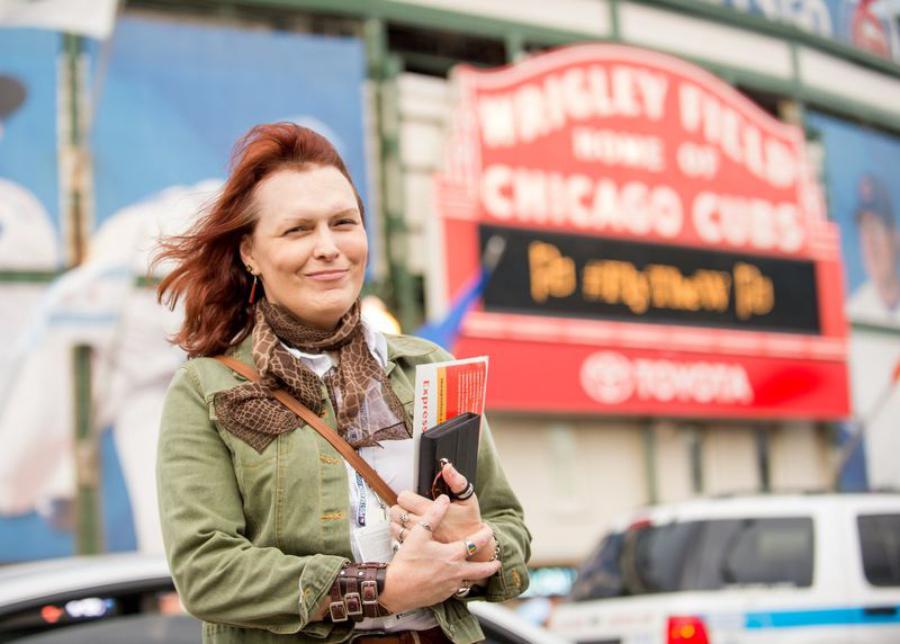 christina kahrl outside wrigley field in 2007

“It looks like a trans person has never gotten a job before at this level, at a major daily newspaper, in any topic, let alone sports,” said Kahrl, who spent a combined 25 years, dating back to 1985, living and working in Chicago – and is a 2014 inductee into the Chicago LGBT Hall of Fame. “Landing this job is as historic as my getting hired by ESPN was 10 years ago, or my coming-out almost 20 years ago.

“It comes at a critical point in our nation’s history and for journalism – the conversation about the public lives of trans people has changed, especially the role of trans folks in sports. We’ve seen major outlets do a remarkably bad job in their coverage of subjects touching on trans people’s lives, especially in the realms of sports and public policy. As an industry, journalism can and must do better. One of the best ways it can do that is by tapping into the pool of trans journalists who would do more than diversify their newsrooms, hiring them would help them develop a more rigorous and frankly professional approach to covering stories in an area of front-page political engagement.”

Kahrl, originally from Sacramento, added: “From the New York Times on down, we’re seeing far too many outlets completely brick the subject and deliver second-rate reporting or worse. Both the subjects of those stories and the audiences they’re written for deserve better; they deserve competent journalism.”

Kahrl lived in Chicago from 1985-2000 and then again from 2007-2017. She is now living in Long Beach, Calif., at least for a few more weeks before moving to the Bay Area. And then her daily life will be everything Giants, 49ers and more.

The Chronicle sports section has a dozen writers, a couple of editors – and its coverage includes the Giants, 49ers, Golden State Warriors, San Jose Sharks, Stanford, Cal and the other four NCAA Division I schools in the area, plus other colleges and preps, and golf when it swings into town, and more.

Locals also still have an emotional attachment to the Raiders, formerly in Oakland, now playing in Las Vegas.

“I step into the role with a sense of history and a sense of responsibility, for the people I’m working with, for the people I’m working for, to the readers, and to the teams and players whose stories we want to tell. (And) also to my community, so that when the next trans person gets to come through that door, it’s both no big thing and entirely its own big, wonderful, entirely awesome thing by someone who’s trans or genderqueer or non-binary and most of all just great at doing what they do. You don’t get to this level by being a wallflower,” Kahrl said.

Her multiple short-term goals are simple: “Learning to work with my new teammates. Getting a handle on the print side of the role because that’s new to me and I have a lot to learn. Embracing the value of the experience of the writing team and the editors and identifying where I can help them.”

Kahrl spent 10 years working at ESPN, with both print and TV coverage. And that too was history-making. “The decade I spent there didn’t just demonstrate that I could do the job, it helped show that trans journalists can work at the highest levels of journalism,” she said. “I earned a couple promotions, got to write and break news, learned a lot about multimedia coverage, planned big projects, and managed and worked alongside some incredibly talented people.”

Kahrl’s ESPN run included working her first World Series on-site, in 2013. She also interviewed legendary longtime baseball player Minnie Minoso about integrating baseball as the Jackie Robinson of Latin America and the Hall of Fame, which she tagged as “a privilege, albeit a tragic one, because it proved to be his last interview – Minnie passed away soon afterwards and has yet to get his due from Cooperstown,” Kahrl said. “As the first out trans sportswriter getting to cover Chris Mosier, the first out trans member of Team USA in international championship competition, (that also was a highlight). That probably (was) my single favorite assignment, not (just) because Chris is both a tremendous athlete and an athlete worthy of admiration by all Americans.”

The ESPN gig included time working alongside talented storytellers, such as David Schoenfield, Jeff Passan and Buster Olney, among others.

“Nothing’s more fun that being caught in the moment, thinking about how we’ll cover a no-hitter as it’s unfolding, or handling the trade deadline,” she said.

Kahrl singled out three who she learned the most from, including Claire Smith, the first woman to become a full-time MLB beat writer “(who) taught me a lot about our responsibilities to others and to the history of the game,” Kahrl said.

“Learning from working with Marly Rivera, because of her investment in telling the stories of players, but also from her readiness to tackle the toughest stories and put absolutely everything into a story. And lastly, from the editor who hired me, David Kull, who taught me a lot about leadership while not being afraid to get his hands dirty, leading from example while trying to expand ESPN's diversity of perspectives and breadth of baseball coverage.”

Kahrl was encouraged her to apply for the San Francisco position by several writers (at both ESPN and the Chronicle). The final blessing came from her wife, Charley.

“Getting to work for Emilio Garcia-Ruiz, the Chronicle’s new editor-in-chief, is a privilege and an unparalleled opportunity for me to learn as well as work with that writing crew, in one of the best sports markets in the country, in one of the greatest cities in the world,” Kahrl said. “Chicago spoiled me; I've always thought only the Bay Area is at that level as a place to be.”

And yes, she misses Chicago, dearly. Well, except the winters.

Starting with the people who call Chicago home.

She formerly lived in Rogers Park, which she tagged as “a real neighborhood with a whole lot of everything mixed in, where kids at the local school would learn my dog’s name and greet us, where you learn the names of everyone at your favorite places to grab a street taco or a slice. “That sense of community, that transcended but also fully included LGBTQ folks … in a way, that’s my vision of what this country can be, where we get along, and maybe talk about a ballgame or two to pass the time.

“On some level, Chicago is home because it’s still the place I feel, in my bones, where I became an adult, it’s where I took some of my biggest steps, personally and professionally, and where I married Charley.”

Kahrl is uncertain if she will write for the Chronicle, too. Her editing and editor responsibilities will take precedent.

“(This is) one of the best jobs in sports journalism for anybody, anywhere, because of the teams, the people who will be covering them and the fans who will be rooting for them. It’s a challenge and an adventure,” Kahrl said. “(This is) an opportunity for me to take what I’ve learned from 25 years in digital media and help a talented sports team deliver incomparable sports coverage.”

Sounding Off On Sports … With Christina Kahrl

Long-term goals: “Glory for the Sporting Green, success for the Chronicle, and hundreds of thousands of readers, new and old, who can’t wait to read our next story.”

Sports, Circa 2021: “(It is) at a place where we can’t just stick to sports, and that’s a good thing. If anything, sports gives us the power to confront a lot of the toughest issues in our society today, because sports reflects those issues, amplifies and embraces them while also getting to enjoy competition, excellence, and effort. The excellence of the present that we see on the diamond, the gridiron, the court, the ice … that’s no accident; that’s a reflection of everything we’re learning about performance, and that opens new vistas for us as journalists as far as storytelling.”

The Past Year: “I think it helped us reframe what’s important, not just in sports, but in life. Enjoying sports is essentially about how we enjoy our own time, and it’s still woven into the life of the country – through the pandemic, through the bracing conversations we need to have about race and equality in this country. That isn’t just about 2020, it’s about now, and it’s about tomorrow.”