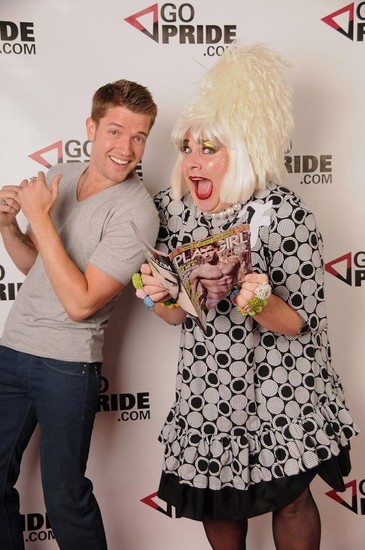 Kroell kicks off Pride at the ChicagoPride.com 8 year anniversary celebration

Chicago, IL - Ronnie Kroell, a finalist from season one of Bravo's Make Me a Supermodel and cover model for the June issue of Playgirl magazine, returned to celebrate Pride weekend in his hometown of Chicago.

The 27-year-old Chicago native returned to an energetic crowd of friends and fans as he hosted the ChicagoPride.com 8th anniversary party at Roscoe's, 3356 N. Halsted.

"It's so nice to be home and working with my friends at ChicagoPride.com," Kroell said as he signed June issues of Playgirl magazine. "It was great to see hometown friends and make some new ones."

A portion of the proceeds from last night's magazine sales are being donated by Kroell to the Center on Halsted.

"It was a perfect night of community, friends and laughs," said ChicagoPride.com Vice President of Community Affairs Bill Pritchard, who co-hosted the evening with Miss Foozie. "It was a great night celebrating our past; looking toward future successes."

Last night during the celebration, the GoPride.com management team announced the unveiling of a major redesign of the website and a scheduled national launch.

"We are proud of the content and ambitious features that we've added throughout the years," said R. Matthew Inawat, president. "With our new release, ChicagoPride.com will set a higher standard by offering new features and incentives to those who depend on us for daily news, events and photo coverage and to visitors who browse us to help them explore the richness of Chicago's diverse LGBT community."

Kroell will make another meet and greet appearance on Saturday, June 26 between 7 p.m. - 9 p.m. at Cesar's on Broadway, 2924 N. Broadway. Watch for Kroell on the ChicagoPride.com - 103.5 KISS FM float during the 41st annual Chicago Pride Parade on Sunday, June 27 at Noon.