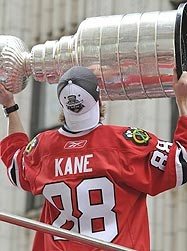 Chicago Blackhawks and Cubs will participate in the Chicago Pride Parade

The National Hockey League champions have accepted an invitation from the Chicago Gay Hockey Association to be part of the gay Pride Parade. Brent Sopel, a Blackhawks defenseman, and his family will carry the Stanley Cup before a huge crowd.

"I'm honored to do it," Sopel told the Chicago Sun-Times' Michael Sneed.

The Windy City Times first reported the Chicago Gay Hockey Association's invitation, which was made last week. CGHA was founded in 2002 and has about 40 players.

"We are thrilled and honored for them to consider and accept our request," CGHA President Andrew Sobotka said. "It's just the news we wanted to hear. For the Blackhawks to do this is amazing. It is wonderful to know everyone is helping to make 2010 a year to break down barriers."

Sopel told the Sun-Times that he is marching in honor of Brendan Burke, the son of Toronto Maple Leafs general manager Brian Burke, who was killed in a car accident two months after coming out late last year.

"When Brendan came out, Brian stood by him, and his whole family stood by him, like every family should," said Sopel. "We teach our kids about accepting everybody. Tolerate everybody, to understand where everyone is coming from."

Chicago Blackhawks President John McDonough made a special arrangement for the Cup to be flown back from Los Angeles for Sunday's parade.

Another major Chicago sports franchise, the Chicago Cubs, have announced they will also participate in the parade for the first time. One of the Cubs' primary owners is Laura Ricketts, who is openly gay.

The 41st annual Chicago Pride Parade is this Sunday, June 27th. The parade will step off at Noon from the corner of Belmont and Halsted and travel north along Halsted through Chicago's Boystown neighborhood. The crowd is estimated to be nearly half-a-million people.