Due to Chicago COVID Restrictions, Santa Speedo Run Will Look A Little Different This Year 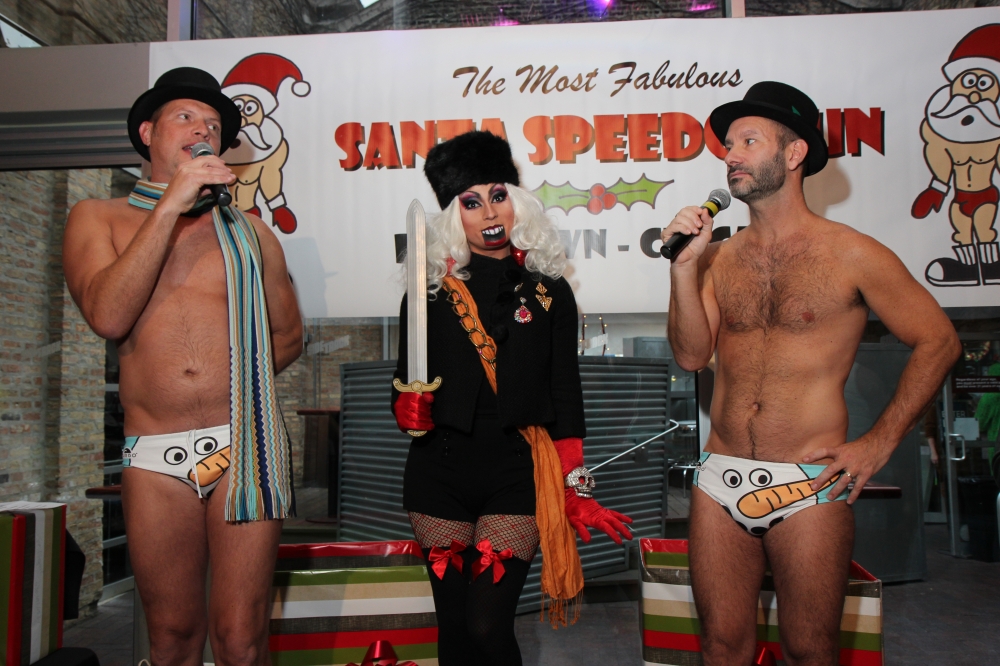 The annual holiday tradition of Speedo-clad runners parading through the Northalsted neighborhood for a 1-mile run on a brisk Saturday morning in early-December has been silenced by the pandemic – sort of.

There still will be Speedo-clad runners throughout Chicago this Saturday, Dec. 12, from 1-4 p.m. Just not in the traditional format of the annual Santa Speedo Run that starts and finishes at Sidetrack, then leads into an afternoon of shenanigans at the popular Chicago bar.

The Santa Speedo Run – Northalsted 2020, presented by Tito's Homemade Vodka and Sidetrack and benefiting Center on Halsted, has revised its run this pandemic-filled year. Organizers are encouraging Speedo-clad runners and walkers to trek through the city on Saturday on their own – and still help fundraise for the Center.

Runners can register at SpeedoRun.org and all are encouraged to form small teams.  Runners/teams then can plan their own 1-mile route, which should be completed on their own, masked and distanced from others.

Participants are encouraged to share their experiences on social media and top fundraisers are eligible for prizes.

Organizers are encouraging participants to shop for their Speedo needs at Men's Room Chicago, which is offering a 25 percent discount to anyone who says “Santa Speedo Run” at check-out.

David Roberts of Chicago is the long-standing champion of fundraising for this event. The top teams for fundraising this year are Team Santa, Kalamazoo Kringles, and Cleveland Rocks!  “We get a lot of out-of-towners who regularly attend the event and are continuing to raise funds for Center on Halsted in Chicago,” said organizer Karl Sponholtz.

Sponholtz and Jeffrey Colgan live in Chicago and have been married for six years and together for 20 years – since meeting at Sidetrack right before Christmas.

The fun run annually attracts 200-plus runners and countless gawkers. Organizers are hoping to have 100 participants who run on their own this year.

Balof confirmed that the event even has a strong contingent of fundraisers this year from Kalamazoo, Michigan.

“Debbie Foxx is always the hostess with the mostess when it comes to the Santa Speedo Run,” Balof said. “Every year, on the morning of the Speedo Run, I anxiously look forward to seeing what creative look she has.  I think the Nutcracker was my favorite, probably followed by the year she was an ice princess.”

“Jeff and Karl, the creators and founders of the Santa Speedo Run – Northalsted, have facilitated the raising of hundreds of thousands of dollars through the event,” Balof said. “Their energy around this event is contagious and they are true pillars of the Chicago LGBTQ+ community.  They are a pleasure to work with and besides always raising a lot of money, they also know how to create a great party and bring the fun.  It is an honor to work with them on this event every year.  And while this year is different, I already look forward to getting this event back, bigger and better next year.”