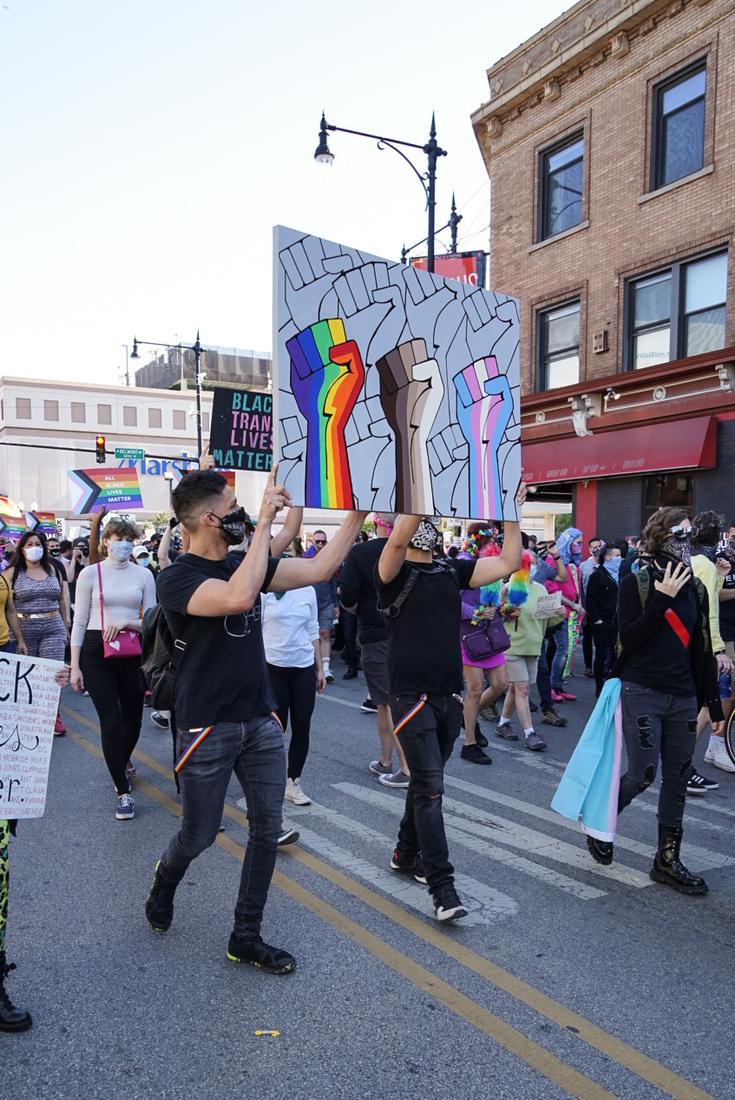 drag march for change on june 14

ACTIVATE:CHI, a grassroots activist organization, announced that it is collaborating with Chicago Pride organizations, Northalsted Business Alliance and the businesses of Boystown, for a march that promises to focus on members of the Black transgender community.

Titled "Black Trans Lives Matter: A BLM Pride Protest," the seven-mile march will begin at Clarendon Park in Uptown at 11 a.m. and proceed to a rally in Grant Park on Sunday, June 28, replacing Chicago's annual Pride Parade, which was canceled for 2020 due to the COVID-19 pandemic.

Organizers said in a statement, "The current political, social and economic climate, coupled with the clear inability of our government to protect the most vulnerable members of our communities, spurred the organizers of Chicago Pride to connect with ACTIVATE:CHI to reinstate this year's Pride as a march. The plan is to create a pro-POC LGBTQ+ march, with a specific focus on the discrimination and injustice faced by the Black Trans Community.

"We are collaborating with Black Lives Matter Chicago and stand in solidarity with their demands. Specifically, we demand the immediate reallocation of funds for the CPD budget, civilian oversight of law enforcement in Chicago and nationwide, an end to qualified immunity and the reinstatement of transgender civil rights protections in health care."

For more information visit activate-chi.net/initiatives/june-28th or the Facebook event page.

A second protest march titled “Pride Without Prejudice/Reclaim Pride March” in collaboration with BLM Chicago as well as CAARPR (Chicago Alliance Against Racist and Political Repression), OPAC (Organized Communities against Deportations) and various LGBTQ health and women's organizations will kick-off at 12 p.m. on Sunday, June 28, at the Belmont Red Line station before traveling north.

“Rather than a parade, with most people passively viewing from the sidelines, we will have a participatory march which centers Black and Brown voices. Trans voices, so often shunted to the side, will be prominent,” organizers said in a statement posted on Facebook.

The 2020 Chicago Pride Parade, scheduled for June 28, was officially canceled on June 11 after the City of Chicago canceled “all permitted special events” through Labor Day.

Protesting police brutality and demands for equality were at the heart of the Stonewall riots, which propelled the LGBTQ rights movement in the U.S. in 1969. Chicago's first Pride parade followed a year later and drew about 100 people.

“There are many ways still to celebrate just as there are ways to show solidarity with those who are struggling for equality just as we LGBTQ people have in the past and are continuing to do today,” Pride Parade coordinator Tim Frye told GoPride.com. “We encourage everyone to find their path and their commitment.”

This is the first time the Pride Parade has been canceled in 50 years. The parade is set to return in 2021.